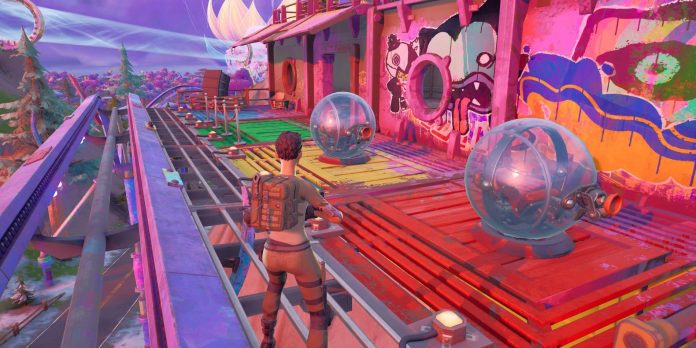 One of the most unique challenges in Fortnite Chapter 3 Season 3 challenges Fortnite players to deliver one of the Baller gaming machines to the island’s wind tunnel. This is a particularly interesting challenge for Fortnite players, combining a vehicle returning from one of the previous seasons of the game with one of the most challenging locations of the new map. Players have many ways to earn experience points for all the content in the Fortnite Chapter 3 Season 3 battle Pass, but by looking into the Rave Cave on the island and jumping into the Baller, players can complete one of their challenges relatively quickly and quietly. .

Fortnite Chapter 3 Season 3 recently brought another map update to the game: the war in Chapter 3 Season 2 is coming to an end, and the inhabitants of the island are going on summer vacation. One of the new locations on the map in the northwestern part of the map is known as Rave Cave and includes an underground dance party and a roller coaster on which players can ride with Ballers. Ballers are fast—moving spherical vehicles made of durable glass that can snap and cling to nearby surfaces. Although they previously appeared in Fortnite Season 8, they were placed in the Fortnite vault for Season 10, and Ballers in Fortnite Chapter 3 Season 3 now only appear in Rave Cave.

The Rave Cave and its roller coaster are surrounded by a wind tunnel created by turbine-shaped gates that form a circulating air tunnel that can slowly transport players through the air. As this latest Fortnite test shows, the wind tunnel can also carry Ballers that appear nearby in several locations in the Rave Cave location.

Entrance to the wind tunnel with a baller

To send a Baller into a wind tunnel in Rave Cave, players first need to find a Baller. As mentioned above, Ballers only appear in Rave Cave in the northwestern part of the map along with a couple of Fortnite NPC characters. Ballers appear in several different places in Rave Cave, and they can be found by simply following the roller coaster track around the location. However, players should keep an eye out for other players, as Rave Cave has a lot of loot and equipment, as well as a fun roller coaster ride, making it a popular landing spot in the current Fortnite meta.

Once the player has found the Baller, he can jump into it and follow the roller coaster track until he finds a place where the track passes next to the wind tunnel. Since the Ballers can get stuck on the roller coaster track, the player must use the Baller grabbing tool to tie himself to one of the wind tunnel turbine gates. From that point on, it’s pretty easy to just use the Baller acceleration for a little extra momentum to swing in the air currents in the wind tunnel. There are other Baller tasks in Fortnite, so players can read and perform them at the same time.

However, for players who want to complete the task while avoiding acrobatics, another option is available. The Rave Cave roller Coaster track actually has a small section of wind tunnel that players and Ballers climb to the top of Rave Cave Mountain. Although players may not enjoy the ride, a Baller ride into this little wind tunnel will still be considered the end of the test.

House of the Dragon: First Images of The Spin-Off of Game...