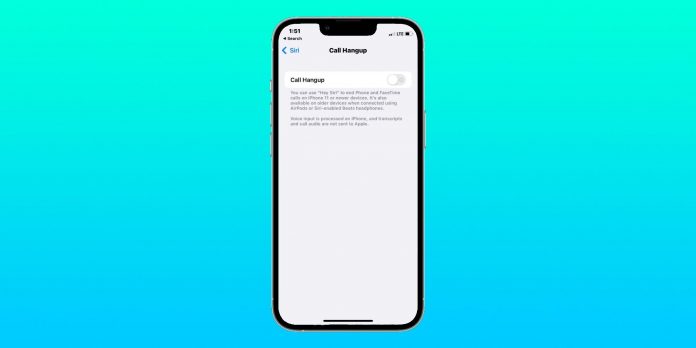 iPhone users will soon be able to end calls using Siri voice commands, as this feature is included in the upcoming release of iOS 16, a full public release of which is scheduled for autumn. The latest version of Apple’s mobile operating system was announced in June at WWDC, an annual event dedicated to the company’s yet-to-be-released software. Although many functions were highlighted at the event, some of them remained unannounced — they can be discovered later either during testing or by studying the release notes of the software. Immediately after the announcement of iOS 16, a beta version of the developer software was released at WWDC 2022, allowing developers and other testers to test the new software.

Before a new version of iOS becomes available to the public every fall — usually along with a new iPhone line — the mobile operating system goes through several beta testing periods. The first of these periods includes the beta version of the developer software, which is the most unstable version of the software intended only for use for development purposes. This period gives developers the time they need to make sure everything is working properly after the update. This is followed by a public beta version of the program, in which willing technology enthusiasts can test iOS 16 in front of the general public. Finally, iOS 16 will be released for everyone in the fall with new features, including the ability to end calls using Siri.

iOS 16 adds a new “Hang Up Call” feature to Siri, but it is not enabled by default. To enable this feature, open the Settings app and open the Siri and Search menu. Here are all the settings related to Siri, including the latest “Hang Up Call” function. Since it uses Siri, it’s important to make sure Siri is enabled and the “Hello Siri” feature is enabled. In the first section of the switches there will be a section labeled “End call”. Click on it and turn on the switch next to “End Call” to enable this feature. After the “Hang Up Call” function is enabled, the phrase “Hi, Siri, hang up” will end the current call on the phone or FaceTime.

No matter how easy it is to end a call using Siri on iOS 16, there are several important points to note. The “Hang Up Call” function is only supported on iPhone 11 or later, but it can be used on an older device if a new pair of AirPods or Beats is connected to it. In addition, despite the fact that ending a call using voice control is convenient, it should be noted that other call participants will hear the voice command. When “Hi Siri, hang up” is said, these words will be heard and the call will be terminated after the command. If users are looking for an unobtrusive way to end phone calls or FaceTime calls, Siri is not the best option. Despite this, the call termination function provides useful hands-free call management.

Siri offered huge functionality regarding phone calls and FaceTime long before the announcement of iOS 16, but it was impossible to end the call earlier. Currently, users can initiate a call with a command such as “Hi Siri, call John.” With a simple voice command, iPhone users can communicate with anyone from their contacts without using their hands. However, the voice control functions do not end there. Incoming calls can also be controlled using Siri voice control, as well as accept or reject them. By saying “Hi Siri, accept the call” or “Hi Siri, reject the call”, you can accept or reject the call using only the user’s voice. With the new iOS 16 feature, it’s just as easy to end a call after it’s already been initiated or accepted using Siri.

How to participate in the TikTok program “What is your weakness?”...