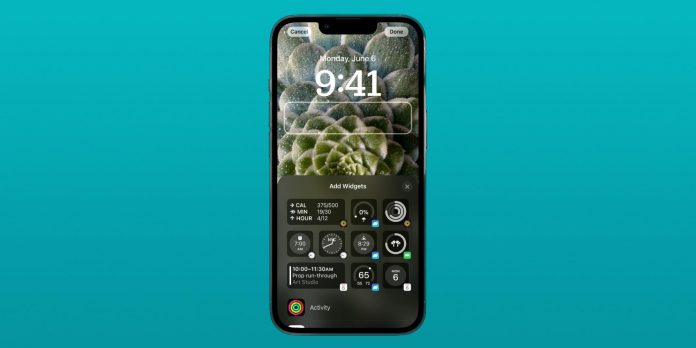 iPhone users will soon be able to create multiple custom lock screens and switch between them in seconds, as the new feature is set to become publicly available with the release of iOS 16 later this year. The next version of Apple’s mobile software was unveiled in June at the Worldwide Developers Conference, an annual event dedicated to developers and their software. One of the flagship features of the upcoming release is the redesigned lock screen user interface, which for the first time allows users to make custom changes to their lock screen. As the company continues to tweak iOS 16 ahead of its fall public release, it’s becoming increasingly obvious exactly how users can change their lock screen to better suit their needs.

Apple is improving its software releases with beta versions of programs that allow developers and active users to try out the company’s unreleased software, trying to fix bugs and consolidate new features before a full public launch. The first unreleased version of iOS 16 that became available was a beta version for developers, intended only for use by Apple ID accounts registered in the Apple Developer Program, which costs $99 per year. Since beta versions of developer software are the most unstable iOS release, they are strictly reserved for devices used only for development or testing. However, in July, Apple released a public beta that anyone could subscribe to, and it gives an idea of what iOS 16 will be like in everyday use when it becomes available in the fall.

Related: First Impressions of iOS 16: What Works and What Needs to be Improved

Changing and switching between lock screens in iOS 16 is very easy to do, and in fact it may be too easy. A simple long press on the lock screen — when the iPhone is unlocked with Face ID or Touch ID — will open a new lock screen user interface. This can be a problem because there are other switches on the lock screen that require a long press to activate. On modern iPhones without a physical Home button, there are switches that turn on the flashlight and open the camera with a long press. When using the new iOS 16 lock screen interface on a daily basis, accidental touches that open settings can become a problem. However, this complication is negated by how easy it is to manage and change the lock screens in iOS 16.

To open the lock screen UI in iOS 16, unlock your iPhone with Face ID or Touch ID and tap and hold the current lock screen. A new page will open, which will seem familiar to Apple Watch users, since in fact it is an enlarged version of the user interface that controls the company’s smartwatch dials. Swiping left or right will display the existing lock screens saved on the iPhone, and tapping on a given lock screen will make that screen the current lock screen for the device. To customize an existing lock screen, go to this lock screen and click the “Customize” button at the bottom of the page. An editable screen opens with available fields that can be changed, highlighted with gray frames.

To see the parameters that can be changed, click on this field, circled in gray. The large time block located in the upper middle of the lock screen cannot be removed or reduced, but the font colors can be changed by tapping on the time and selecting one of the 12 fonts and any color. The time can also be displayed in Arabic, Indian Arabic and Devanagari depending on the user’s preferences. The field above the time can also not be deleted, but it can be changed from the date to a set of other widgets “Weather”, “Fitness”, “Calendar”, “Clock”, “Promotions” and “Reminders”. There is a new bottom widget panel, where you can place four smaller widgets or two larger ones, as well as additional parameters such as the News, Battery and Home widgets.

To add any of these widgets, click on the field you want to change and select the widget to be added to this field. Changing the order of widgets is as simple as dragging them across the field, similar to how apps move on the home screen. If the field already has the maximum number of widgets, the message “Delete widget” will appear, so users need to click the “minus” button on the widget they want to delete before adding a new one. The new iOS 16 lock screen user interface is familiar to Apple Watch users and alien strictly to iPhone users, but for both audiences, the ability to customize lock screens provides more information at a glance.