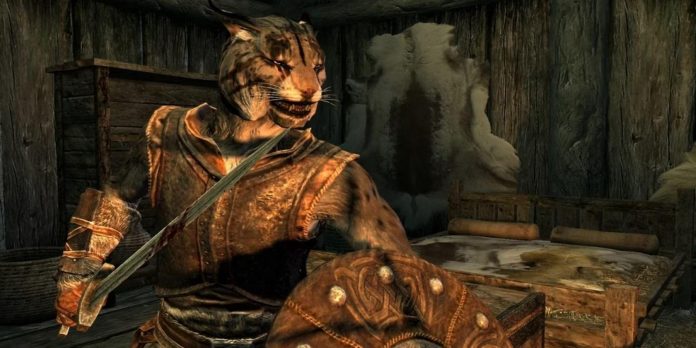 In Skyrim, the Thalmor of the Aldmeri Dominion are one of the more complicated villains in the Elder Scrolls series, and have conquered the Imperial Legion mostly by tricking other nations such as the Khajiit of Elsweyr into fighting for them. Such a deception is nothing out of character for the Thalmor, since they also took credit for ending the Oblivion Crisis in the Summerset Isles and perpetuated the Civil War in Skyrim. Though they were a minority group for much of Tamriel’s history up until the fourth era, they’ve quickly risen to power by the events of Skyrim, and have lofty goals of conquering the entire continent.

The Thalmor were first established in Tamriel’s second era as two different branches of the Summerset Isles’ government. They predate the Aldmeri Dominion in its current form, and have been reformed twice along with it. Their rise to power is some of Elder Scrolls lore not that’s never appeared in the games themselves, and particularly brutal, as it involves multiple invasions of Cyrodiil and Valenwood as well as a great deal of oppression and assassination, even among the people of the group’s own nation. The Thalmor as a whole is dedicated to bringing about a new Merethic Era in which elves rule Tamriel, and wiping out the human races. In the fourth era, they forced the Empire to sign the White-Gold Concordat, which put the Empire and much of Tamriel under their control.

The Khajiit, on the other hand, are a race of feline humanoids who hail from the province of Elsweyr in The Elder Scrolls games. The playable Khajiit that appear in Skyrim and other games are only one breed, with some quadrupedal breeds looking not unlike housecats while others are twice as tall as men or elves. The Elder Scrolls’ Khajiit are often dealt a bad hand and denigrated as smugglers and thieves, but they have a richer culture and history than it may appear from the games alone, partly due to the fact that Elsweyr hasn’t been explored outside of The Elder Scrolls Arena in 1994 and later in The Elder Scrolls Online. Elsweyr is one of three nations that make up the Aldmeri Dominion, and joined shortly after the Void Nights incident.

The Khajiit’s Relationship With The Elder Scrolls Moons, Masser & Secunda

The world of the Elder Scrolls series, Nirn, has two moons, known as Masser and Secunda. The Khajiit hold a deep connection to these moons, as their phases at their time of birth determine what breed of Khajiit they will be. Masser determines their body shape; they can be large or small bipedal, or large or small quadrupedal. Secunda determines how cat-like they are; when it is waxing, they will be less so, and when it is waning, they will be more so. Most Elder Scrolls games have only one breed, but Elder Scrolls Online has a fuller representation, and hopefully Elder Scrolls 6 has ESO’s different Khajiit breeds so that players can experience more the race’s culture and variety more fully.

The Void Nights was a period of two years, lasting from the years 98-100 in the fourth era, in which both moons disappeared from the skies of Tamriel. This had an effect on the entire continent, but nowhere more so than Elsweyr. In addition to determining their physiology, the moons are deeply rooted in Khajiit theology. The different breeds were supposedly a gift from the deity Azurah – another form of the Daedric Prince Azura – for whom they hold a deep reverence. Masser and Secunda’s disappearance caused a great deal of unrest and strife within Elsweyr, though the full details of the events of those two years are unknown.

How The Thalmor Tricked The Elder Scrolls’ Khajiit Prior To Skyrim

Why the two moons of Skyrim, Masser and Secunda, disappeared is never fully explained. There are a number of theories, some of which place blame on the Thalmor. It could have been a natural astronomical event, but magic is highly suspected to be the cause in some form or another. A certain book in Skyrim, “The Tale of Dro’Shir,” discusses a story wherein some Khajiit became Senche-Cats long ago, losing their mental faculties and becoming wild beasts in the process. It’s possible that events similar to those discussed in the book, where Ra’Wulfharth – also known as Ysmir, a mighty Thu’um user – spoke to the moons and caused them to move, happened again (potentially through some form of Thalmor intervention), but this is unconfirmed.

Regardless of the cause, the Void Nights were key to the Thalmor securing Khajiiti aid against the Empire. The Thalmor took credit for ending the Void Nights, though there is no evidence that they were responsible for doing so. How the moons disappeared and reappeared is one of Elder Scrolls’ biggest lore mysteries, which TES6 will hopefully answer. The Khajiit, however, believed the Thalmor’s claims wholeheartedly, and joined the Aldmeri Dominion out of gratitude. The Khajiit fought on their side in Tamriel’s Great War, which toppled the Mede dynasty and led to the signing of the White-Gold Concordat, though the war’s full effect on Elsweyr and the Khajiit as a whole are unknown. The current attitude of Khajiits toward the Thalmor is also not known, but they may not view them as favorably if the Thalmor treat them like they do the rest of the races, and especially if they treat them like simple animals.

What Happened After Elder Scrolls’ Thalmor Tricked The Khajiit?

The Thalmor’s meddling in Elsweyr did not end with taking credit for the Void Nights. Imperial influence in the region waned and eventually collapsed, just as TES’ Mede Dynasty lost power in the fourth era all across Tamriel. Elsweyr became a vassal state of the Aldmeri Dominion, even more under its control than most of Tamriel. The former government, the Elsweyr Confederacy, was dissolved due to a coup despite lasting since the second era. In their place, the two kingdoms known as Anequina and Pellentine, both of which predated the Confederacy, reemerged. Each was recognized as a client state by the Aldmeri Dominion, which is presumably the current state of the region’s politics during the events of Skyrim.

The kingdoms Anequina and Pelletine are quite different from each other. Anequina controls the northern desert regions, and Pelletine controls the southern rainforests. The main goal of Anequina seems to be preserving Khajiit culture and protecting Elsweyr, while Pelletine is focused on the trade and production of the infamous Moon Sugar, the main ingredient of Skooma. Although Skyrim doesn’t let players make Skooma, it’s featured heavily in the series as an illicit drug. The two kingdoms’ politics aren’t fully explored, but they don’t seem hostile like Hammerfell’s Crowns and Forebears, at least from what’s been revealed. While it’s possible that further meddling on the part of the Thalmor will turn them against each other, perhaps in Elder Scrolls 6, it can be assumed that they’re peaceful for now, and they may come to play a major role in the series going forward.

6 Best Classic Noir Films (and Where to Watch Them)