Home Entertainment How the return of Commander Cody can explain what happened to Rex... 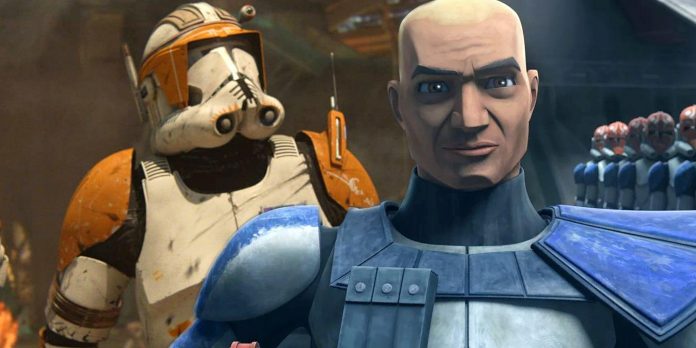 Commander Cody will finally return to the Star Wars canon continuity in Star Wars: The Bad Batch season 2, potentially explaining what happens to Captain Rex by the events of Star Wars Rebels. Commander Cody is one of the Star Wars franchise’s first named clone trooper characters, and in addition to playing a supporting role in Star Wars: Episode III – Revenge of the Sith, he also appears frequently in the seven-season run of Star Wars: The Clone Wars, which depicts his close friendship with General Obi-Wan Kenobi and Captain Rex. Cody’s appearances in the Bad Batch season 2 teaser reveal that he still serves the fledgling Galactic Empire, but this may change by the end of the season, setting Rex up for his retirement on Seelos by the time the crew of the Ghost finds him in Rebels.

Commander Cody appeared in Legends-era Star Wars material before making his live-action debut in Revenge of the Sith, which showcased the effects of clone Order 66 programming by having Cody attempt to kill Obi-Wan upon receiving the order, despite their years of friendship. In the canon continuity, Cody’s story after the rise of the Empire has been shrouded in mystery, with several properties nearly including him. Rebels nearly had the brainwashed clone officer tasked by Grand Admiral Thrawn with hunting down the Ghost crew when the latter deduced that there was a former Republic clone trooper among them. Cody was also considered for a supporting role in the Obi-Wan Kenobi series, where, after presumably overcoming his brainwashing, he’d assist his old Jedi friend during his time in hiding from the Empire.

Captain Rex, due to his more prominent role in The Clone Wars and more robust characterization, is considered the primary clone character of the series, and due to his fan-favorite status, makes numerous appearances in Rebels and plays an important supporting role in the first season of The Bad Batch. With Rex and Cody both confirmed to reappear in The Bad Batch season 2, a confrontation between the two friends seems inevitable, with Cody serving as a foil for Rex, just as Crosshair is a foil for his former colleagues in Clone Force 99. Rex’s mysterious activities in the first season of The Bad Batch may be revealed in the upcoming second season, where Cody could end up being a key reason why the fan-favorite clone captain no longer fights the Empire in Rebels.

What Is Rex’s Mission In The Bad Batch?

Less than a year after Rex and Ahsoka Tano fake their deaths in the Clone Wars series finale, Rex resurfaces in The Bad Batch season 1, where he reunites with Clone Force 99 and helps them remove their control chip implants, preventing them from becoming brainwashed by the Empire. Following their mission to Bracca, Rex implies that he’s forming a resistance movement against the Empire, which is further evidenced by his alliance with the Martez sisters, Cut Lawquane, and Gregor. It would seem that Rex is predominantly seeking out clone troopers to free them of their mind control implants and work alongside them to strike at the Empire. This will most likely put Rex at odds with Commander Cody, a close friend of his who is shown fighting alongside Crosshair for the Empire in The Bad Batch season 2 trailer.

Assuming that Commander Cody is still under the influence of his implant and not serving the Empire willingly like Crosshair, Rex will most likely try to free his friend from the Empire’s influence. This would not only restore Cody’s free will but also make him a key member of Rex’s burgeoning rebel cell. Considering Rex’s activities in The Bad Batch season 1, he appears to be populating his cell with other rogue clone troopers. In addition to Commander Cody, Gregor, Wolffe, and the Bad Batch itself, other prominent clone characters from Revenge of the Sith and The Clone Wars may be part of Rex’s resistance movement.

The Bad Batch Will Include A Canon Clone Rebellion

With a growing rebel cell of rogue clone troopers, Rex and Cody could be gathering forces for a series of major battles against the Empire, giving the post-2014 canon continuity a new version of the Legends timeline’s Clone Rebellion. Although the Empire ended production of clone troopers and the Clone Wars may have left few clones alive to oppose the fascist regime, clone troopers are among the galaxy’s most formidable warriors and are far superior to the Empire’s forces. Rex, Cody, and their fellow clone allies (which will likely also include the Bad Batch) may be planning a series of key missions to destabilize the Empire, allowing the rest of the galaxy to rise against it and restore the Galactic Republic and thus their freedom. Unfortunately, the events of the original Star Wars trilogy and Rebels spell doom for such an objective.

The Rebellion Fails, Wiping Out Most Surviving Clone Troopers

While the failure of a canon Clone Rebellion is inevitable, The Bad Batch season 2 story can easily find ways to make it a tragically doomed objective for Clone Force 99 and Rex. Perhaps due to Crosshair, Admiral Thrawn, the overwhelming numbers and superweapons of the Imperial military, or Palpatine himself, Rex’s rebel cell will be defeated and dissolved, perhaps with the majority of its members dying in combat. This would, tragically include Commander Cody, ending his story on a heroic note while also explaining why he has no other appearances and few mentions after the events of Revenge of the Sith.

How A Failed Rebellion Changes Rex’s Character By Rebels

Along with The Bad Batch, Gregor, and Wolffe, Rex would survive the failed Clone Rebellion, which would explain Rex’s whereabouts and demeanor in Rebels season 2. Despite their best efforts, a rebel cell comprised of the galaxy’s finest warriors not being enough to stand against the Galactic Empire would dissuade Rex from attempting to fight against them again (at least until he joins the Phoenix cell). While Clone Force 99 would part ways with Rex, he would lie low on Seelos with fellow survivors Wolffe and Gregor, far from the influence and interest of the Empire for a time. This scenario would both conclude the story of Commander Cody and connect the characterization of Captain Rex in Star Wars: The Bad Batch and Star Wars Rebels.

Fallout 4: Dies The Bitch River, Who Inspired The Game Dogmeat