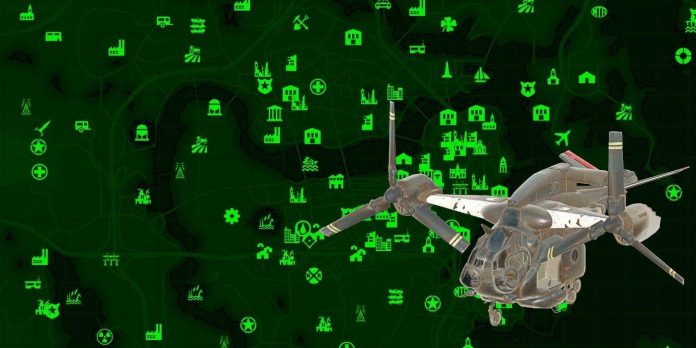 Fallout, and other Bethesda games like it, have a big problem with their maps, and the next Fallout game has the opportunity to fix it. Open-world games like Fallout have been consistently outdoing one another for the past several years, each new one being bigger than the previous benchmark. What results in the lesser entries in this genre are lifeless open worlds cluttered with mindless busy work. However, an unconventional solution may solve this open-world map problem for Fallout 5.

Fallout is a series of RPGs that take place in the nuclear wasteland that was once America. Originally created by Interplay, and now owned by Bethesda Softworks, the Fallout games are some of the most influential RPGs in the entire industry, let alone its genre. Not only are there now six games in the Fallout series but a Fallout TV show for Amazon has just started filming. However, as fans wait for more news of Fallout 5, which is to be Bethesda’s next game after Elder Scrolls 6, there remains one problem that the next game must address, the increasing scale of the franchise.

Open-world games like Fallout have been chasing the trend of making bigger and more detailed maps to show off graphical prowess. However, this is proving to be a hindrance rather than a help, since bigger worlds mean more stuff needs to be put in it to keep the game from appearing lifeless. The solution here is not necessarily to scale the world back, but rather to split the world into pieces.

Previous Fallout games have shared certain limitations that started all the way back in the first game. For instance, players who want to play as a ghoul or super mutant have to forgo the main games for the Fallout tabletop RPG, because the main games’ playable character is strictly human. Another big limitation is sticking the player in a single map, covering part of one state, and having to wait for DLC in order to explore anywhere else. For the most part, this is fine; however, if the Fallout games are going to continue expanding its maps, then a compromise is needed to ensure the player won’t be wandering for hours on end without running into anything interesting.

Rather than having a single world map covering a portion of a single state, Fallout 5 could have two or even three maps that the player can travel to and from freely. These maps could cover multiple states, or even just one very large state like California or Texas. Having three maps around the same size would expand what DLC maps like The Pitt in Fallout 3 do for their respective games: make the world feel even larger, and the story more epic as a result. It would be much easier to make three smaller maps feel populated than trying to launch the largest map in series history and attempt to make it feel full.

How Fallout 5 Could Implement Multiple World Maps Into Its Story

Due to the expansion of the Brotherhood Of Steel in Fallout 4, vertibirds are now more common in the Fallout universe than they were before. So joining a faction in Fallout 5 would have the greater incentive of getting to travel to the other two or more maps in the game via that faction’s vertibirds. It would be an interesting and new way for players to traverse the map, and it could help set Fallout 5 apart from other games in the series.

Related: Fallout 5 Will Be Too Real By The Time It Comes Out

Making multiple maps an active part of Fallout 5’s gameplay and narrative, rather than just being a thing added in by DLC, would expand the world and make it more interesting. Players would get to see how vastly different environments react to the same event, such as a more actively hostile equivalent of the war between the NCR and Legion in Fallout: New Vegas. For all of New Vegas’ greatness, the player was never given a chance to see what it’s actually like to live in NCR or Legion territory, besides talking to various characters in New Vegas who’d actually been there. For instance, the talk with Cass in New Vegas about how the NCR handles raiders vs The Legion is good for seeing the war from a merchant’s point of view, but there’s little to compare it to since the player hasn’t actually been there themselves.

The most obvious drawback to this approach, obviously, is how it would affect the core Fallout experience. Fallout, all the way back to the original game, has been just as defined by the desolate isolation of its environments as much as it is its dark humor. While there is a lot to do in any given Fallout game, half the fun is the long treks across the barren, empty landscape, where an entire side story can just be stumbled upon by accident. Splitting the map into three smaller pieces may be good for keeping this element from becoming tedious, but it also introduces the risk of those maps becoming too cluttered with quests. This would harm the experience of wandering the wasteland by interrupting that precious atmosphere with another distracting side quest.

There are potentially massive drawbacks to any big new idea for a game series, though often it’s what a series needs to stay relevant. Fallout 76, with its lore-ruining retcons and failed live-service implentations, has made many veteran fans anxious about Bethesda’s direction for the franchise going forward. Splitting the map into three, slightly smaller open worlds, might – if nothing else – be the kind of big new idea that’ll turn some heads back the franchise’s way.

Fallout as a series has survived a lot that most game series don’t come back from, its original developer going bankrupt, a decade passing by without any updates, and a relaunch by another, larger studio that took the series in a radical new direction. Members of the original dev team are still working, even getting to make Fallout: New Vegas, which is praised by even Todd Howard. But Fallout is in different hands and likely staying there. However, the series must evolve instead of chasing this “bigger is better” trend to its own demise, and having Fallout 5 implement multiple maps right off the bat may just be what the series needs to continue without fans becoming bored of the IP for good.

Mario Kart 8 Deluxe, Impressions Of The First Track Pass. At...