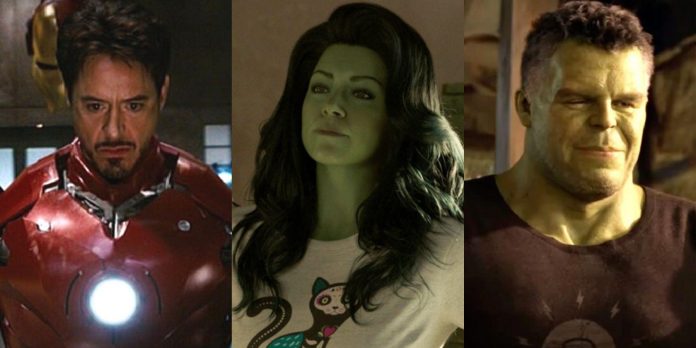 Warning: The following contains spoilers for Episode 1 “The Hulk Woman” on Disney Plus. Fans knew they would get Jennifer Walters, a lawyer by day and a superhero by night, starring when the Hulk Woman was announced for Disney Plus. What they may not have realized is that they also have to learn a little more about the life of her cousin, Bruce Banner.

Bruce appears in the first episode of the series, and in fact it is his blood that causes Jen to turn into the Hulk. The streaming series represents a small twist in her comic book origins, as it’s not her cousin’s blood transfusion that reveals the Hulk in Jen, but his blood with a high gamma content falling on her during a car accident. Bruce takes it upon himself to help make sure that Jen can control the Hulk inside her, to the point of taking her to a brand new place that fans of the Marvel Cinematic universe have not yet seen—a secluded beach lab in Mexico. This lab provides many references to the first meeting of the Avengers.

While most of the original Avengers cast had solo films, some of them, such as Black Widow and Iron Man, interacted with each other before forming a large team. This does not apply to Tony Stark and Bruce Banner. The two didn’t meet face-to-face until they both ended up on a Shield helicopter in The Avengers.

At the first meeting, Tony made it clear that he was a big fan of Bruce’s ability to transform into a “monster of green rage”, and constantly tried to force him to become the Hulk. Although it didn’t happen, they spent a lot of time together in the helicarrier lab before they found themselves in the middle of the battle for New York.

During their conversation, Tony wondered why Bruce wasn’t relaxing somewhere on the beach to keep the Hulk at bay. This line seems to foreshadow Bruce’s secret lab in She-Hulk: Attorney At Law.

It’s not entirely clear when Tony Stark gave Bruce Banner the space that became his beach house and hidden laboratory. Fans can conclude that this happened after the events of Avengers: Infinity War. Why? Because at the end of Avengers: Age of Ultron, the Hulk flies into space on a quinjet and ends up on Sakaar during the events of Thor: Ragnarok. However, one of the items Bruce owns in the beach house is the helmet of one of the Iron Man sentries used in The Avengers: Age of Ultron”, so it’s unlikely that the beach house was given to him before this movie.

The space includes a living room, a secret laboratory in the basement and a beach bar originally built by Tony and Bruce. Tony’s fingerprints are all over the place, and it’s a good idea of how the friendship between them developed after the Battle of New York. Despite Tony teasing him about wanting to see Bruce Hulk, he made sure he had a safe place where he could live and work in peace without putting others in danger. All the technologies in the lab are based on the joint work of Tony and Bruce. Their initials are on the bar before Jen and Bruce destroy it in their quarrel.

The glimpse of friendship that viewers see in the beach house and in the bar makes it clear that their friendship was something more than Bruce falling asleep while Tony was chatting in the post-credits scene, or that they got together to solve a problem for the rest. from the Avengers.

Tony is always portrayed as being very generous towards the other Avengers, despite his ego. At their first meeting, he (or, more precisely, Robert Downey Jr.) constantly offered other team members snacks during the briefing and gave them advice about their abilities, while getting under their skin and butting heads with them. This is especially evident in his interaction with Bruce, whom he literally poked with a stick to elicit a reaction, all the while choosing Bruce’s brain and sincerely being impressed by it.

Over time, he hosted parties for the whole group (“Avengers: Age of Ultron”), built new equipment for them (“Captain America: Standoff”) and defended them in every possible way (“Avengers: Finale”). Tony Stark gave Bruce Banner a house full of research materials and spent enough time with him to experiment and build a bar, which speaks to some of Tony’s best sides, and it’s a wonderful surprise for viewers to see how strong his friendship is. intended for Bruce, grown out of that first acquaintance when they first got together as the Avengers.

She-Hulk: Attorney At Law is currently streaming on Disney Plus, with new episodes available on Thursdays.

Taehyung and Yeontan Are The Cutest Duo, Today We Celebrate Tannie

Netflix has released a trailer for the film “School of Good...