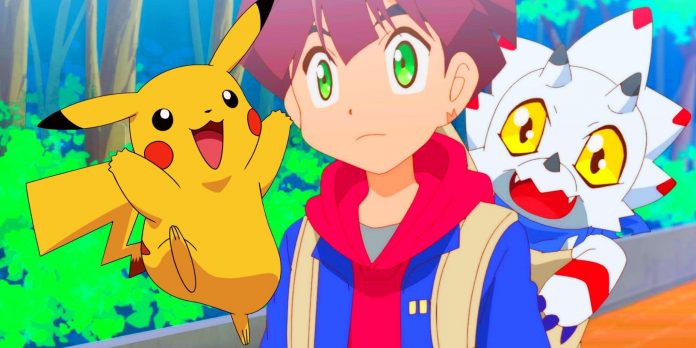 Digimon Ghost Game, the latest Digimon anime series, deftly avoided the Pokemon trap. Since the creation of both franchises in the late 90s, parallels have been drawn between them, emphasizing the similarity of their prerequisites. However, over the years, although Pokémon is still the most popular intellectual property of the two, Digimon has been able to stand out as a separate entity thanks to its unique narrative and game mechanics. The latest Digimon anime, Digimon Ghost Game, is perhaps the most striking example of this differentiation.

Although the concept of small monsters becoming partners of their human counterparts sounds similar, the distinction between Pokemon and digimons already begins here. While Pokemon “pocket monsters” like Pikachu are flesh-and-blood creatures that function as a substitute for real animals in the Pokemon universe, Digimon “digital monsters” like Agumon originate from a parallel digital reality. And although the relationship between Pokemon and their trainers, as well as digimons and their partners, may seem familiar, digimons are able to talk, which allows you to establish a different type of connection between a digimon and his partner than between a Pokemon and his trainer.

The way each franchise approaches its anime also sets them apart. While Pokémon has been following Ash Ketchum’s adventures since 1997 in different regions and with an ever-changing cast of minor characters, such as former Pokémon gym leader Brock, Digimon takes a different approach. Instead of forever following the adventures of one boy and his friends, Digimon anime sometimes completely changes the composition of the characters and the overall plot, in fact, starting anew, using only Digimon knowledge as a basis. These and other differences led to the creation of the Digimon Ghost Game, which again deftly avoids comparisons with Pokemon, using its approach to anime and jumping into a genre that Pokemon have never used before: namely, horror.

Which Digimon Ghost game is better than Pokémon

What Digimon cleverly does in Ghost Game is use their knowledge and world building to create tension. The ghosts mentioned in the title, such as the Man with the Sewn Lip from the first episode, are actually creatures originating from a parallel digital reality, from which Digimons also originate. However, most of the Digimon Ghost Game characters are not yet aware of this reality, and therefore the terrifying things happening in the anime are associated with paranormal phenomena. In addition, Digimon Ghost Game shrewdly uses its setting, which represents the near future, where advanced holograms have become part of everyday life, which leads to the fact that people who see strange things dismiss the possibility of something terrifying as a smart hologram. As a result, a Man with a Stitched Lip can steal people’s time and age them at an alarming rate, and mummies can kidnap people at night. Anime does not hold back to show the eeriness of these events, and all the better for it, combining science fiction and light horror to create something new.

The similarity of Pokemon and Digimons was discussed nonstop, but by creating its own formula, Digimon was able to distinguish itself from its popular competitor and succeed in creating a lasting legacy. Digimon Ghost Game relies on these differences. It touches on a genre that Pokémon has never explored before, separating itself again and giving viewers a new perspective on Digimon in the process.