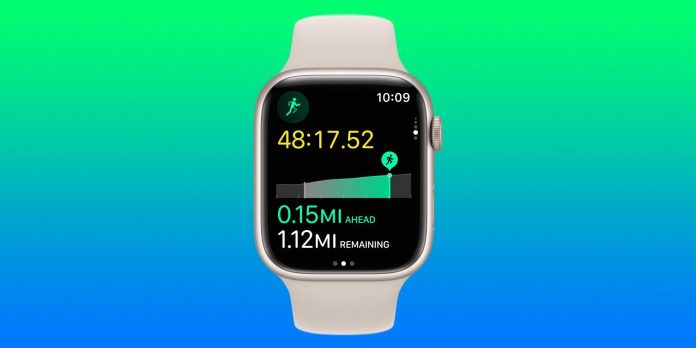 Apple Watch users aspiring to become experienced runners may initially have difficulty with the pace, but watchOS 9 will speed up the learning process thanks to the virtual pacemaker function. The Apple Watch has solidified its position as a competent fitness smartwatch competing with companies like Garmin and Fitbit, and Apple has doubled its position in this market with the latest software releases. New hardware sensors have been added to collect more fitness and health data, and new software features have been added to present data to users. Running is a popular way to improve cardiovascular health, and Apple is trying to create features aimed directly at runners. With watchOS 9, the Apple Watch can monitor the owner’s runs, so he doesn’t have to worry about calculations.

WatchOS 9 is an upcoming software release for the Apple Watch that will bring a number of new updates to the Workout app. It was announced in June at the annual Worldwide Developers Conference, which highlights the latest software changes and improvements. At the heart of watchOS 9 is fitness, specifically designed for running. Apple has introduced new indicators to improve the results of runners, such as vertical fluctuations and stride length. With the help of Apple Watch sensors, the device can measure and recognize the movements of the wearer. These indicators in context can give runners the tools they need to adjust their form. In addition to the new indicators, Apple also improves the training process with the help of a virtual pacemaker.

Link: How to run with Apple Watch and get the best results

The work of the pacemaker in watchOS 9 is intertwined with the routes function, which allows you to create preset running routes before starting a run. You can create them by running a frequently used route and assigning it a name after making the necessary changes. After creating a route, runners will have the opportunity to compete with their best or last result on the selected route. Since running is largely an individual sport, breaking a previous personal record can be a tangible sign of a runner’s progress. Knowing that they are ahead or behind their best results on the chosen route, the Apple Watch user has the best chance to beat their personal best when the time comes.

In addition to preset and previous routes, the Apple Watch can also help a runner determine the pace depending on time and distance. Pace is an important component of successful running, especially when running long distances. To achieve the goal of activity while running, it is ideal to maintain a constant and steady pace, and not accelerate and slow down depending on fatigue. Experienced runners can adjust their pace based on factors such as speed, effort, and energy levels, but it takes time. For beginners, the Workout app in watchOS 9 does all this work. After entering the desired time and distance result, Apple Watch can automatically calculate the pace needed to achieve this goal. The watch can alert users whether they are on track or lagging behind, and shows exactly how far ahead they are, both in miles and meters.

This function, in fact, serves as a virtual simulator that is worn on the wrist. This is due to the fact that many people have targets in mind for normal distances, but are not sure how fast they should run to achieve their goals. For example, an Apple Watch user might want to run a mile in less than six minutes or 5 km in less than 25 minutes. By entering these goals into the Apple Watch, the user can determine exactly what pace — in a mile or a kilometer — is needed to reach this mark. Since the average pace is the default metric displayed in workout viewing modes, users can see their results while jogging. Thanks to the pacemaker capabilities in watchOS 9, even beginners can learn to accurately determine the pace using only their Apple Watch.