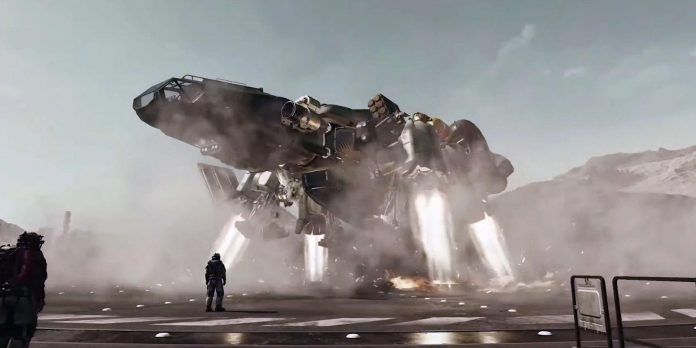 A hidden detail in the Starfield trailer, found by keen-eyed fans, may give a clue to the release date of the game, although nothing has been officially announced. The veracity of this is debatable, but if it is true, it has interesting implications, and it may be more likely than it seems at first glance. The release of Starfield was scheduled for November, and then was postponed to 2023, and the final release date is currently unknown.

Starfield is the upcoming Bethesda IP, which takes place in space, in the Milky Way galaxy in 300 years. Players will be able to explore more than 1000 planets, collecting resources and fighting hostile creatures and malicious pirates. They will also be able to fully customize their spaceship to each individual piece and their character with a comprehensive creation system that includes their backstory. Some aspects of other Bethesda projects, such as Fallout, will also reappear in Starfield, including base building — the best feature of Fallout 4. Most of the planets for players to visit will be wild and largely devoid of civilization, but some settlements and major cities have been confirmed in several places. One of the most comforting features of Starfield is the silent protagonist, unlike Fallout 4, where the voiced protagonist distracted from role-playing aspects.

Starfield currently has a soft release window in the first half of 2023, meaning it should be out by June unless unforeseen complications arise. Let’s hope that new news will appear soon and light will be shed when fans can reasonably expect to receive a copy of the game. Since this is the first original Bethesda intellectual property in more than two decades, and at the same time it takes precedence over Elder Scrolls 6 and Fallout 5, there are a lot of expectations from it. It remains to be seen what the 1000 planets in Starfield mean for game content and whether they will turn out to be unique or become excessively repetitive.

A big hint of the Starfield release date is contained in the Xbox Showcase trailer from June 12, uploaded by Bethesda. In it, the number “SV 821 393” is printed on board one of the ships. This is important because No. 821,393 was the number assigned to the patent for the first working aircraft of the Wright brothers. This is a worthy hint at the history of aviation, since Starfield will have a lot of players flying in space, and at first glance it is nothing more than a little-known Easter egg. The clue to the release date comes from the date of filing the patent application, March 23, 1903. It was issued on May 22, 1906, but March 23 can be considered the date when air travel really began. Players could fly between planets on Starfield ships on the anniversary of the day when aviation really became possible, if this Easter egg really had the weight that some fans give it.

Whether this means that Starfield will actually be released in March or not remains to be seen, but if it’s true, it’s very interesting. November 23, 2023 will mark 120 years since the filing of the patent application — a pleasant even number. It also reads like March 23, 2023, which is exactly the visually appealing date that Bethesda director Todd Howard admitted to being close to in an interview with IGN 2021. Skyrim was released on 11/11/11, and he was apparently adamant about this date when the release was planned. It is possible that when it became obvious that Starfield would have to be postponed, Todd Howard chose this date both because of its historical significance and because of its aesthetic appeal. Past leaks from Starfield have been proven right before, so even if the theory is extensive, it shouldn’t be discarded right away.

Another possible Starfield release date is June 6. This is right on the edge of the early 2023 window that Bethesda promised in May, so then or thereabouts is another clear possibility. Starfield was moved to 2023 to give developers more time to work on the game and improve its many features. This is an ambitious project with more than 1000 unique environments, a complex character creation system and many other things such as quests, dialogues, weapons and armor for fine tuning. More time spent on the game means it could come out better, and Bethesda may have taken advantage of the delay to be able to polish it as much as possible in hopes of avoiding a launch like Cyberpunk 2077 for Starfield.

There is also the fact that June 6 is 6/6/23, another aesthetically pleasing date. With the possible exception of June 26, June 26/6/23, this is the very last month of June, so this may be most likely if Bethesda is aiming for a release date near the end of the promised release window.

Suicide Squad: Kill The Justice League confirms Its Presence At The...