Home Entertainment How Reginald found out the secret of the third season of Lila’s... 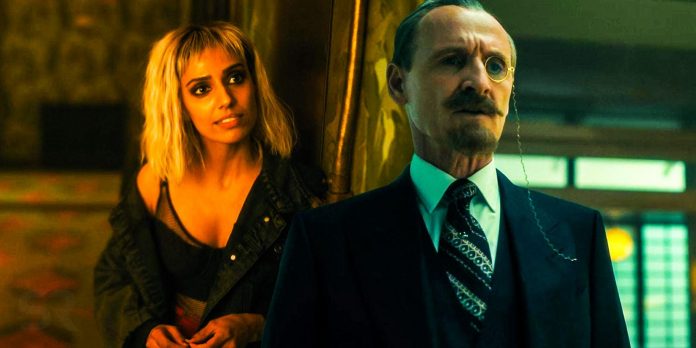 Warning! SPOILERS for the third season of The Umbrella Academy.

Reginald Hargreaves found out Lila’s big secret in the third season of Umbrella Academy, but how? In the third season of Umbrella Academy, the Hargreaves siblings come face to face with their replacements, known in Umbrella Academy as Sparrow Academy, after they changed the timeline with their antics in 1960s Dallas. Reginald’s return is also an unexpected consequence of this new timeline, as he originally died back in the first season. Along with Reginald’s reappearance comes the return of the infamous monocle he wears, which may explain how he found out that Lila was pregnant, without her knowledge. his.

The third season of Umbrella Academy delved deeper into who Reginald was, where he came from, and what his master plan was. Although it was already revealed in the second season that Reginald is actually an alien, it was still unclear what his purpose on Earth was or why he decided to adopt seven children with superpowers. Season 3 finally revealed the answer to this riddle, as it took him seven people to activate the machine at the Umbrella Academy’s Oblivion Hotel so that he could rewrite reality into one that suits him. He succeeded — the members of Umbrella Academy lost their superpowers, reality was rewritten, and his wife Abigail is now alive.

How could Reginald pull off something like this and how did he know that Lila was pregnant? During the three seasons of Umbrella Academy, Reginald was almost always one step ahead of his children. The comics have a more specific explanation of how this is possible, and it seems that the latest season of Umbrella Academy is leaning in that direction too. In the Umbrella Academy comics, Reginald’s monocle is not just a fashion statement. He gives him his own abilities, abilities that explain how he found out that Lila is pregnant.

In the Umbrella Academy graphic novels, the monocle Reginald wears is so ubiquitous with his character that it even inspires his alternate name “Monocle”. Reginald decides that he doesn’t want his children to call him “Father”, so he ordered them to call him “Monocle” instead, which proves once again how distant and cold he was as a guardian. The pseudonym is obviously inspired by the monocle he always wears, but his role in The Umbrella Academy comics is bigger than his role in the series. In comics, the monocle gives the wearer the opportunity to see the absolute truth about what he is viewing. In fact, if a person wearing a monocle looks at someone, he can perceive the inner nature of that person. If the Umbrella Academy show explains in the next season (yet to be confirmed) that the monocle does contain this power, it will go a long way to understanding how Reginald found out about Lila’s pregnancy.

One example of using a monocle to see the absolute truth in comics is when a Fifth puts it on himself. In the end, he sees the experiments that led to the enhancement of Pogo’s intelligence. These experiments were so terrible (the show significantly changed this factor of Pogo’s backstory) that the Fifth lost consciousness of all people.

So far in the series, the monocle has only been used as a distraction in the first season to play out the mystery of who could have killed Reginald, but his return in the third season of Umbrella Academy cannot be ignored. Reginald’s achievements on Earth may be related not only to his talent. If the monocle has the ability to reveal the absolute truth, Reginald’s genius can easily be attributed to the abilities of the monocle. Knowing his childhood secrets, as well as the fact that Lila was pregnant, will always give him a significant advantage. If Umbrella Academy is renewed for season 4, the monocle could potentially give the brothers and sisters of Umbrella Academy an advantage they’ve always seemed to lack when trying to make sense of this new reality that Reginald has created.