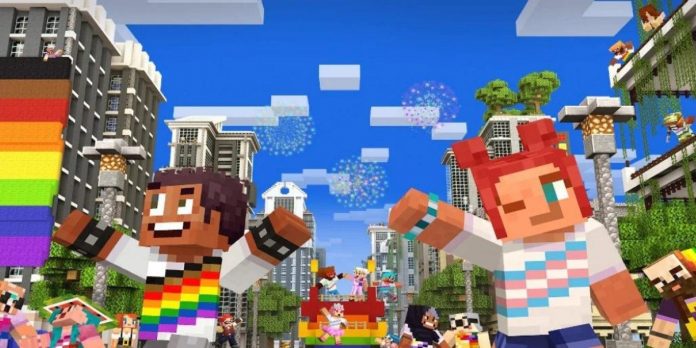 As every year, June was the month of pride, and the gaming world joined in the celebration. At Mediatonic, the Fall Guys team celebrated Pride Month by releasing a Painted with Pride costume that players can get for free, and the Forza franchise allowed players to get a free special rainbow coloring for the 2009 Pagani Zonda Cinque Roadster. However, these aren’t the only franchises showing their pride; many other studios are celebrating Pride Month, including Mojang, a Minecraft developer.

For Mojang, the Pride celebration will last all summer, and gamers will be able to participate even if they don’t play Minecraft. However, this year’s Minecraft celebration seems pale in comparison to what Mojang has been doing in previous years. If the studio wants to improve the celebration of Pride Month in 2023, it must learn from its strategies of the past years, as well as add some new ideas.

Minecraft is a game that has brought together an active community of players from all over the world who come together to share their creations and express themselves through an easily changeable game world. Mojang has recognized the diversity of the global Minecraft community, and Pride Month is just one of the ways the studio celebrates the diversity of the Minecraft fan base.

In past years, Mojang did its best for Pride Month, and its celebration usually lasted from June until the whole summer. Best of all, gamers often don’t even need to play Minecraft to join the celebration, as the studio hosts events both in its game and on its various social media accounts. Facebook instagrammed this in 2021, when much of the celebration of Minecraft Pride Month was posted on social media including Twitter, Facebook, Instagram, and YouTube. There, Mojang posted Pride-themed Facebook posts, Minecraft mobs creating their own Pride moments, Pride-themed inspirational house tours, and a special edition of Meet a Minecrafter on YouTube. On the official Minecraft website, members of the Mojang Studios team shared their experiences.

While celebrating Pride Month can be fun, it’s worth remembering that it arose out of the need to counteract oppression and prejudice against marginalized identities, and while significant progress has been made, LGBTQIA+ communities still face many challenges. Consequently, as part of the celebration of Mojang Pride Month in 2020 and the Build a Better World studio initiative, Mojang donated $125,000 to five organizations, including: Campaign Against Homophobia, Colombia Diversa, OutRight Action International, Know Your Rights Camp and RainbowYOUTH.

How Minecraft can improve the celebration of Pride Month in 2023

Mojang has been pretty muted this year due to the celebration of Pride Month. The studio marked the beginning of the celebration on June 20, informing the players that the studio will celebrate the whole summer of Pride. In its announcement posted on the Minecraft website, Mojang raised a buzz by informing players that they can expect more Pride content soon, and will also pay attention to members of the Minecraft community and members of the Mojang team. This is a great move, as there are many LGBTQIA+ game streamers.

Next year, Mojang can do a lot to brighten up their holidays. Firstly, it would be nice to start celebrating the Pride earlier. While the fact that Mojang holds its Pride events throughout the summer is welcome, the studio should also consider starting events in early June so that gamers can participate while the hype around Pride Month is still high. Secondly, Mojang should rework some of its ideas that worked well in the past. This includes pride-themed social media posts, the presentation of limited edition Minecraft skins and other items that players can get for free, as well as donations to LGBTQIA+ groups. Finally, it would be great if Mojang increased the number of pride month celebrations in Minecraft itself. This can be done in subtle ways, such as putting a rainbow in the sky during Pride Month or giving Creepers rainbow skin.

Minecraft has embraced all members of its huge community, regardless of their race, gender or sexual orientation. Thus, the celebration of Mojang Pride Month was always worth looking forward to. While this year’s events have not been as exciting as usual so far, the studio can still learn from its past successful events to ensure that next year’s Pride Month celebration will be memorable.

CM Punk Refuses to Say AEW Is a Threat to WWE