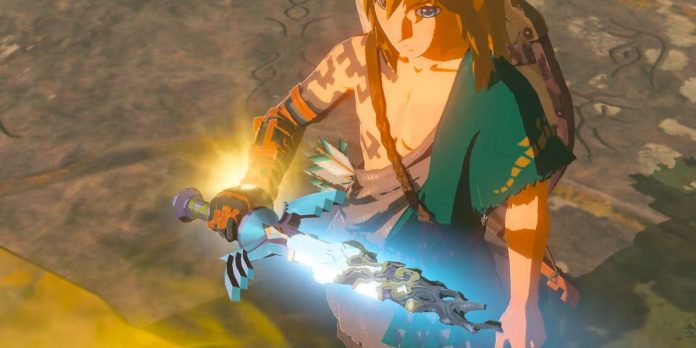 A lot of video game series have iconic items, symbols, or characters that appear regardless of what else is being done with a new entry. Final Fantasy is known for iconic elements, with Chocobos, crystals, a person named Cid, and tons of monster races appearing in most entries. Other long-running franchises have kept the names while reinventing their characters and concepts like Tomb Raider’s reboot trilogy. Not many come close to the intensely self-referential nature of Final Fantasy, but The Legend of Zelda may be its closest competitor.

Link, Zelda, and Ganon have been having epic clashes for over 35 years now, and they show no signs of stopping. Along the way, various elements from old games have been recycled and renewed continuously. Link’s iconic green outfit, hearts and fairies, and the Triforce itself are all aspects that have appeared time and time again. Ironically enough, one of the other iconic items was not in the original Legend of Zelda. It took until The Legend of Zelda: A Link to the Past for the Master Sword to be introduced. This Blade of Evil’s Bane has consistently been a major, often story-related upgrade in several Zelda titles since, although its precise role changes frequently.

RELATED: The Legend Of Zelda: 10 Things About The Master Sword That Make No Sense

The Legend of Zelda: A Link to the Past and A Link Between Worlds

The Legend of Zelda: Ocarina of Time

Although A Link to the Past was the Master Sword’s first appearance, fans are more likely to remember it from Ocarina of Time. After Link gathers the three Spiritual Stones and the titular ocarina, he’s able to pull the Master Sword from its pedestal. As the young Link does not qualify as the hero who will use the Master Sword, he is put into stasis for seven years and emerges in his late teens to end Ganondorf’s reign. While the Master Sword is once again not the strongest weapon in the game, it remains relevant as the tool Link uses to travel between the present and the future. At the end of his adventure, Link returns the Master Sword to its pedestal and uses his ocarina for time travel during Majora’s Mask.

RELATED: How Hyrule Manifests in Every Legend of Zelda Game

The Legend of Zelda: Oracle of Seasons and Oracle of Ages

The two Oracle titles for the Game Boy Advance mark the first time in The Legend of Zelda’s history that the Master Sword is an optional item. It is the strongest sword in each game, but one title must be beaten and linked to the other to obtain it. The player must discover certain Secrets and complete a sidequest to upgrade the Noble Sword to the Master Sword. It bears mentioning that this is merely an upgrade and not the real Master Sword. Something like this is repeated with the Four Sword in Four Swords Anniversary Edition, where completing the Realm of Memories unlocks a Master Sword that leaves Link split into four.

The Legend of Zelda: The Wind Waker

Should Ocarina’s Hero of Time fall, the Master Sword would have laid hidden in the sealed-off Hyrule Castle. Once The Wind Waker’s Link completes the trials marking him as a worthy hero, he gains access to the frozen Hyrule beneath the ocean waves. Unfortunately, removing the sword causes time to begin flowing in the conquered Hyrule, and Ganondorf regains some of his lost power. Even worse, this is the first iteration of the Master Sword that has been weakened by evil. Link must awaken two new Sages in his friends Medli and Makar to restore the blade. Its final appearance in this timeline is in the petrified Ganondorf’s forehead as the ocean crashes onto Hyrule.

The Legend of Zelda: Twilight Princess

In reference to its original appearance, the Master Sword in Twilight Princess can be found deep within the Faron Woods. When Link is permanently transformed into a wolf by a shard of Zant’s magic, Zelda tells him and Midna that the Master Sword is the only cure. Near the end of the game, Link can supercharge the Master Sword with the power of the Sols found in the Palace of Twilight. This is temporary, but it is supposedly the work of the gods of the Twilight Realm who wish for Link to prevail. As is tradition, the Master Sword strikes down Ganondorf and is returned to its pedestal during the credits.

The Legend of Zelda: Skyward Sword

As it is the earliest game in the franchise, Skyward Sword reveals the true origins of the Master Sword. It was originally known as the Goddess Sword, and was possessed by a spirit called Fi. Link needed to perform a ritual involving the three Sacred Flames to transform it into the Master Sword, though even then it was incomplete. At this point, the Master Sword is capable of activating the Gate of Time, through which Link can reach Zelda and gain her blessing to form the True Master Sword. After defeating Demise, Link inserts the sword into a pedestal in the Sealed Grounds, and Fi remains sleeping in the Master Sword from then on.

At the moment, the latest incarnation of the Master Sword in Zelda’s timeline belongs to the three Breath of the Wild games. On top of being wielded by the hero 10,000 years in the past, Link also obtains it 100 years before Breath of the Wild takes place. He puts it to good use throughout Age of Calamity, but in the main timeline he eventually falls to an army of Guardians. Zelda places the sword in a pedestal deep in the Korok Forest and brings Link to the Shrine of Resurrection. In the present, Link can choose whether he wants to obtain the Master Sword, but he will need to complete enough Shrines to gain thirteen hearts before he can take it.

The Master Sword is average for a one-handed blade, but inside a dungeon or near certain Malice-fueled enemies, the sword awakens and doubles in strength. It does not degrade, but does have limited energy reserves and must be recharged. Completing the Trial of the Sword DLC will permanently place it in its awakened state, and the Sword Beam gained at full health will no longer affect its durability. Breath of the Wild 2 confirms Link canonically collected the sword, but it is currently damaged to the point of uselessness. Presumably, Link must once again go on a quest to restore the sword’s power. After that, the Master Sword may finally be able to sleep again, but as the Zelda series will carry on, it’s doubtful that such rest will last forever.