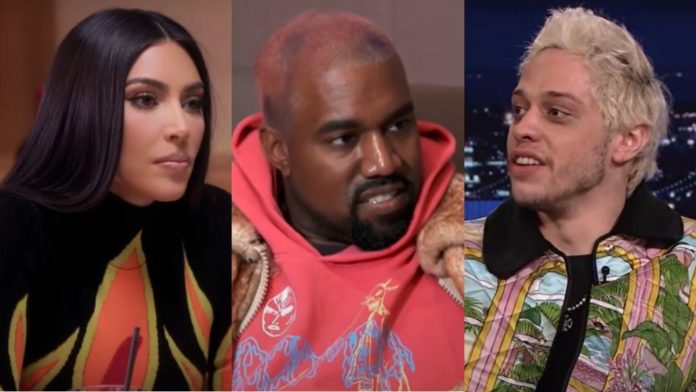 When news spread that Kim Kardashian had broken up with her boyfriend Pete Davidson after nine months, it was only natural for fans to wonder what Kanye West’s reaction would be. The rapper didn’t keep us waiting long as West returned to Instagram to roast the former comedian on Saturday night live. Well, Kardashian’s latest relationship may be over, but that doesn’t mean she’s ready to let her ex-husband resume the social media attacks on the “Skit” that we saw in the first months of 2022.

Kanye West joined the breakup of the Bodies Bodies Bodies actor with Kim Kardashian by posting a photoshopped image from the front page of the New York Times with the headline “Skeet Davidson died at the age of 28.” But the fact that Ye threw his two cents into the situation, apparently, only exacerbated the pain that the Kardashian star was already feeling. A source told E! News:

Kim is upset. Not only is she sad about the breakup, but it has also become a psychological test for her. [She] does not like this behavior, and she will not tolerate her loved ones being treated in this way.

Not only is Kim Kardashian dealing with a split, but now she’s going through what she and Pete Davidson went through in the early days of their relationship, when Kanye West declared a civil war on the comedian, threatening Davidson in the lyrics of his song “Eazy. ”The music video also featured a shot of Davidson, as it showed a plasticine version of the actor’s abduction and beheading. The reality TV star apparently reacted quickly to her ex-husband’s return to Instagram, as the source continued:

She asked him many times to remove the post. She would always protect Pete.

The Grammy winner did delete the image about four hours after he posted it, but I can’t imagine he was happy that his ex-wife was still taking the side of the SNL alum after the breakup. In the midst of the onslaught on social media, the comedian reportedly said he found Yee’s disses about him “hilarious” and even joked about the feud with Kanye during his Netflix special “Pete Davidson Presents Best Friends.” However, the rapper’s comments on social media apparently raised concerns about the safety of Davidson and his loved ones, as people were reportedly showing up at his mom’s house.

In May, Kim Kardashian was forced to file an injunction against a man who reportedly sent her home more than 30 letters threatening to kill Pete Davidson. Even Machine Gun Kelly talked about being dragged into the drama, saying that the actions of the “Jesus Is Coming” performer affected not only his ex-wife and her boyfriend.

We need to see if Kanye West has anything else to say about this, or if he will just continue to work on co-parenting with Kim Kardashian. It seems that fans are waiting for at least another taste of happier times between the founder of SKIMS and Pete Davidson. Having played a vocal cameo in the first season of The Kardashians, the “King of Staten Island” star was featured in the preview of the second season, so many will definitely be watching when the reality show returns to Hulu subscribers on Thursday, September 22. In the meantime, check out our TV program for 2022 to find out what other premieres are expected.

Legend of Zelda: all versions of Dump and how it changed