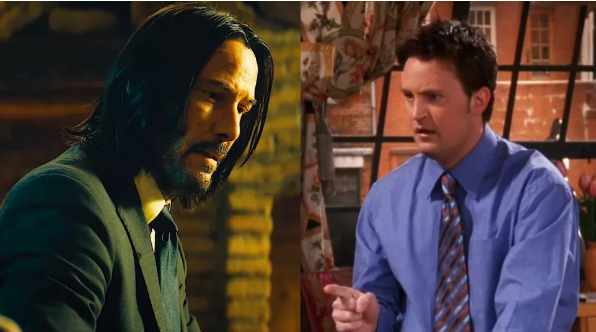 Excerpts from Matthew Perry’s new memoirs have recently become widely distributed, and some of them have attracted more attention than others. The former “Friends” star used the book to talk about her time in the entertainment industry, and also spoke candidly about her struggle with addiction. However, what really caught the public’s attention was the dig aimed at fellow actor Keanu Reeves for still being alive. Perry has since apologized for the shots, and now a new report contains alleged details about Reeves’ feelings.

In the book (titled “Friends, Lovers and the Big Terrible Thing”) Matthew Perry referred to the “Matrix” star while discussing deceased actors River Phoenix and Heath Ledger. Discussing the two deceased performers, Perry wondered how “original thinkers” like them die, and “Keanu Reeves still walks among us.” Perry said the same thing in another section of the book, reflecting on the demise of comedian Chris Farley.

So what does the star who is being criticized think about all this? According to Us Weekly, the 58-year-old actor was simply stunned by the comments made in the text:

Keanu thought the comments were out of sight. Anyway, it somehow backfired on Matthew, so he had to apologize.

It would be fair to say that the feelings were not well received. After they got to the Internet, many on social media came out in defense of Keanu Reeves. Some fans also wondered why the “17 Again” alum decided to call the action star like that. In his apology, the star stated that he was “actually a big fan” of Reeves and that he should have chosen a “random name.”

Matthew Perry has made a lot of serious statements in his new book, some of which involve other famous celebrities. For example, he remembered a party with Bruce Willis a few years ago and persuaded ex-girlfriend Julia Roberts to appear in Friends. He also claimed to have kissed Valerie Bertinelli when she was still married. Later, the actress seemed to respond to the accusation with a witty video in TikTok. In addition, it seems that Perry insulted other people with his words. Medical workers did not agree with the actor’s comments about the operation for stomy, a life-saving procedure that helps to remove waste from the body.

As for the comments addressed to Keanu Reeves, it is likely that the actor will not officially speak out about this. Reeves turned out to be somewhat of a recluse, unless he was actively promoting the film, and he mostly managed to stay away from the drama. In any case, one would hope that he and Matthew Perry would be able to talk privately about what happened.

The book “Friends, Lovers and the Big Terrible Thing” is now available in bookstores, as well as in online stores.

PS Plus Premium has a lot of potential for Harvest Moon...