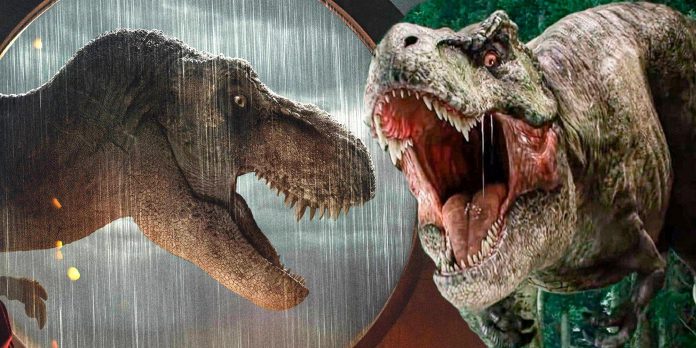 Jurassic World: Dominion would be incomplete without the appearance of the formidable Tyrannosaurus Rex, but the role of the dinosaur in the film could have been much more significant if events had developed differently. In every movie of the Jurassic Park and Jurassic World franchises, the creators do their best to show as many unique dinosaurs as possible, but the Tyrannosaurus constantly appears in all of them. However, the latest T-Rex movie leaves a lot to be desired, especially in the key scene at the end.

In Jurassic World: Dominion T-Rex (or “Rexy” as it was called in the fan community) Captured by the Department of Fish and Wildlife and taken to the Biosyn Dinosaur Sanctuary, located somewhere in the Dolomites in Italy. At the climax of the film, a tyrannosaurus fights a giganotosaurus, a terrifying reptile that, according to Dr. Alan Grant, is the largest known carnivorous dinosaur in the world. However, things come to a head when Giga apparently kills Rexy during their battle, only for her to get a second wind after a short time. She then kills Giga with some help from a Therizinosaurus with long claws. The Tyrannosaurus makes its famous roar at the end of the film when the main characters escape from the shelter, and she continues to be the undisputed predator in her new home.

This scenario can be seen in almost every movie in the franchise, with the exception of Jurassic Park 3, where a spinosaurus brutally kills a Tyrannosaurus. Despite this, there seems to be some sort of rule that apparently requires the T-Rex to emerge victorious in every battle it participates in, similar to the T-Rex battle against velociraptors in the first Jurassic Park and the battle with the hybridized Indominus Rex in the first Jurassic World. However, while Rexy’s clash with death against Gigi is truly thrilling, one could argue that the scene could have been much more meaningful if it had shattered all expectations in the form of her irrevocable death in Jurassic World: Dominion.

Why T-Rex Had to Stay Dead in Jurassic World: Dominion

“Jurassic World: Dominion” is a very important film in the entire franchise. In its trailers, it was stated that this would be the most recent entry in history, which now consists of 6 films. As a result, he makes many references to the original films from the memory of how it all started. It even goes so far as to return the first cast of “Jurassic Park”, consisting of Alan Grant, Ellie Sattler and Ian Malcolm. The fan-favorite Tyrannosaurus Rex (along with the velociraptor) is essentially the mascot of the franchise and in a sense is the physical embodiment of the life of the story. Every time Rexy or some other Tyrannosaurus remains alive at the end of the movie, it leaves him open for another sequel. However, Dominion is considered to be the last film. Instead of getting up after what seemed like a predictable fake moment, it would be very symbolic for Rexy to finally fall, thus her death becoming the bittersweet end of the franchise.

However, the symbolism of Jurassic World: Dominion does not stop there. The battle with the giganotosaurus itself could also be a kind of metaphor. Like the return of familiar faces in a movie, Rexy’s face is always welcome in every movie. Rexy probably represents the older generation of viewers and directors who made the franchise what it is today. If Rexy had really died by the hands (or claws) Gigi, this could be a depiction of the rise of a new generation, similar to the Jurassic World films that took the place of the original Jurassic Park. Either that, or it could be a way of saying that the series is over and it’s time for a new franchise to step up and take its place. Although the idea was very interesting, unfortunately, it was not what it should have been.