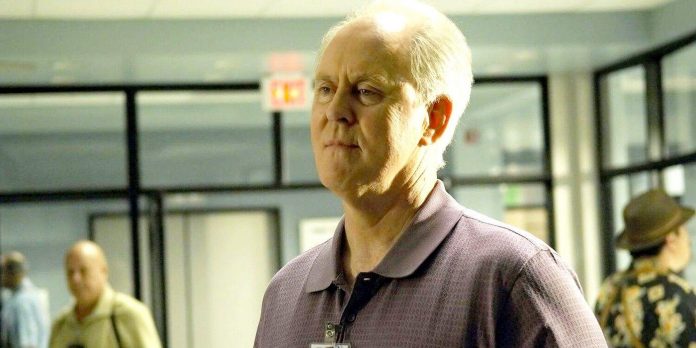 John Lithgow tells how he found out the spoilers about Dexter even before he got the role of the legendary Trinity Killer. First shown in 2006, Dexter tells the story of Dexter Morgan (Michael S. Hall), a blood analyst by day and a serial killer by night. The Showtime series quickly became a hit among viewers thanks to the intense plot, black humor and vivid performance, but the finale of the series in 2013 was universally criticized by viewers. The reboot of the mini-series “Dexter: New Blood”, which aired last year, finally completed the story of Dexter, but again caused controversy among fans.

Throughout the series, Dexter encounters many rival killers, but none of them is as iconic as Lithgow’s Triple Killer. In the fourth season of the series “Dexter”, which is considered the best season of the series, the main character Hall tracks down one of America’s most prolific serial killers, whom he soon begins to suspect that he is a suburban resident and seemingly innocent family man Arthur Mitchell. Although the season ends with Dexter eventually killing Trinity Lithgow’s Killer, it comes at a cost when it is revealed that Mitchell killed Dexter’s wife, Rita. Lithgow’s character was so popular that he even reprised his role in a flashback cameo in Dexter: New Blood.

In a new retrospective video about his career for GQ, Lithgow explains that he really was able to learn the entire storyline of Trinity Killer Dexter even before he signed up to participate in the show. Lithgow explains that while creator Clyde Phillips and producer John Goldwyn were offering him the show, he asked so many questions that he ended up getting the entire arc of the Trinity Killer characters, which was more than Phillips and Goldwyn planned to share with him. Check out Lithgow’s full comment below:

“I received amazing information from Clyde Phillips. He and John Goldwyn, the producer, sat with me in the CAA and kicked out my agents. we’re going to tell you about the Trinity Killer. And they told me the whole, detailed, unfolding story, but I kept saying, “Well, wait, what happened to the baby?” You know, things like that. And they had to tell me, and I kept saying, “More, more, more” to the point that they gave me a lot more information than they intended. But they tried to convince me to take part. And when I heard all this, I said, “No, I won’t tell anyone any of this, but no, I don’t do it.” And then my agent and my lawyer took up my case and said: “John, you have to do this.” So I said yes and had a great time.”

For many fans, Lithgow’s character remains the highlight of all eight seasons of Dexter. From Lithgow’s story, it becomes clear that Phillips and Goldwyn intended to force the actor to play the Killer of the Trio, even if it meant divulging details of the story that had been top secret until now. Interestingly, Lithgow reveals that even the entire arc of the Trinity Killer season was enough to convince him to take part, and he still refuses the role despite all the information he was given. Fortunately, however, his agent and lawyer eventually convinced him to participate, much to the delight of many of Dexter’s fans.

Dexter may have stumbled in later seasons, but the “Trinity Killer” storyline in season 4 is a testament to how strong the series was at its peak. It’s hard to imagine anyone other than Lithgow playing this role at this moment, and it’s entirely possible that without him, Dexter’s Trinity-Killer storyline wouldn’t have been as powerful or as loving as it is now. Despite some dubious series finales in the main show “Dexter” and “Dexter: New Blood”, the end of season 4 and the completion of the character’s arch Lithgow remains a highlight even after all these years.

Resident Evil Wins Commemorative Box For 25 Years Of The Series