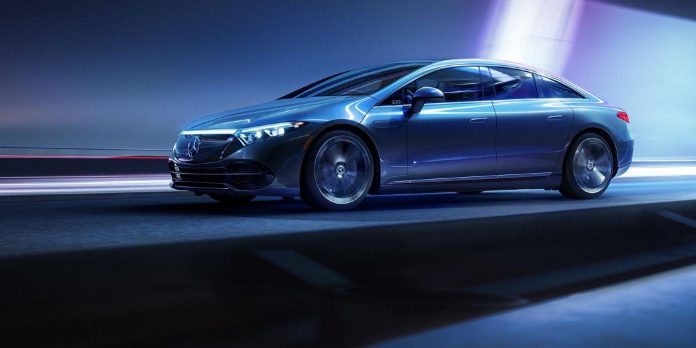 The Mercedes-Benz EQS marks the automaker’s efforts to produce high-quality electric vehicles. However, how fast is this electric car compared to the maximum speed of competitors? As the electrification of transport spreads, Mercedes-Benz is introducing its innovative electric car to the world. The German automaker has been preserving the tradition of luxury for several decades, and many of its models are considered classic cars. The S-Class is one of the most successful Mercedes models, especially because cars in this category strive to demonstrate the best of comfort, luxury and technology. The EQS can’t run on gasoline, but it sets the stage for Mercedes-Benz electric vehicles with an all-electric transmission.

The EQS is expected to become part of a much larger fleet of electric vehicles called the EQ. This fleet will consist of battery electric models such as the EQS SUV, the EQE mid-size sedan and the EQE SUV. Interestingly, the EQS was not conceived as a flagship model, given that the EQC crossover was prepared for release last year. However, an indefinite delay has led to the fact that EQS claims to be the flagship electric car. The EQS, designed to replace the current S-Class as a more environmentally friendly vehicle, is expected to pose a threat to existing electric sedan variants such as the Tesla Model S.

By topic: How the Mercedes-Benz Concept EV Drove 747 Miles on a Single Charge

The EQS comes with a brand new design platform called Mercedes Modular Architecture (MMA). Mercedes-Benz intends to use this project platform to develop the remaining electric vehicles in the electric vehicle fleet. Made in Sindelfingen, Germany, the EQS is offered in two trim levels: EQS450+ and EQS580 4MATIC. The 450+ model costs from $102,310 and is equipped with a synchronous electric motor with constant excitation (PSM), which develops a power of 329 hp and a torque of 417 lb-ft. The 450+ has a battery capacity of 107.8 kWh and has a rear-wheel drive configuration. The top speed of the 450+ is 130 mph, and the record from 0 to 60 mph is 5.9 seconds. The power reserve for the 450+ is 350 miles. This electric vehicle has a total wheelbase of 126.4 inches, a total length of 207.3 inches and a total width of 75.8 inches. Meanwhile, the 4MATIC variant sells for $125,900 with an acceleration rating of 4.1 seconds. Unlike the 450+, the 4Matic is equipped with two PSM engines, which collectively develop 516 hp and 631 lb-ft of torque. Although the power reserve for the 4MATIC is 340 miles, which is ten miles less than the 450+ with a single charge, both models have the same battery capacity.

Available as a five-door sedan for both models, each model has a set of trims that offer a variety of features, from charging to safety. The 450+ model has three trim levels: Premium, Exclusive and Pinnacle. While the 450+ starting price is $102,310, consumers will have to pay $108,510 to purchase the luxury Pinnacle trim. Pinnacle comes with heated and ventilated electric seats. Mercedes-Benz has also made wireless charging in the front and rear of the cabin available for some trim levels. In addition, the 450+ comes with standard safety features such as Car-to-X communication, Active Steering assistance, Active Braking Assistance, Active Blind spot Assistance and Active lane change assistance. The 580 4MATIC is also available in three trim levels with the AMG Line Exterior design and almost the same safety features.

The Mercedes-Benz EQS is equipped with a universal technology package, such as a 12.3-inch dashboard, a 17-7-inch OLED touch screen and a 12.3-inch passenger display. Mercedes-Benz claims that its technological advances allow the EQS to adapt to drivers’ habits and anticipate needs, unlike any other electric vehicle on the market today. Drivers can expand their streaming capabilities by saying “Hello Mercedes” to access platforms such as Apple Music, Spotify, TIDAL and Amazon Music.