Home Entertainment How Erica Jane and Tom Girardi are forced to Pay Back the... 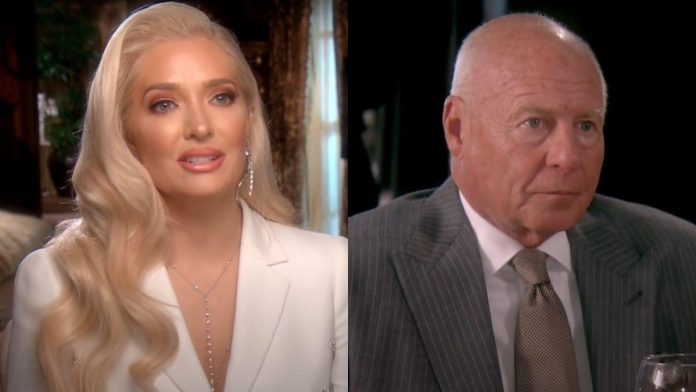 Suspended Los Angeles lawyer Tom Girardi and his former law firm filed for bankruptcy back in 2020. As a result, they will have to face a lot of civil lawsuits from previous clients, partners and creditors who allegedly did not pay the settlements and fees due to them. (Reports show that Girardi and his colleagues embezzled more than half a billion dollars to fill their pockets.) His current ex-wife Erica Jane, known as the “Real Housewives of Beverly Hills,” is also featured in these lawsuits. because of accusations that she helped schemes by transferring money from the firm to her entertainment company EJ Global. The last thing in this situation is that a former married couple is forced to return a huge amount of money they owe through another auction.

A group of auctioneers and appraisers John Moran is watching the auction for more than 200 items, which will take place on September 21, and online auctions will be opened a few days before that, RadarOnline reports. Apparently, a handful of Girardi’s expensive personal belongings are up for sale. This includes a Steinway piano worth about $60,000, several rare paintings, and a library collection of first editions (for example, the first edition of Niccolo Machiavelli’s The Prince).

It is assumed that the entire lot will bring about $280,000 for bankruptcy distribution. Obviously, these are far from the supposed nine digits in question. However, 80 percent of the auction sales are planned to be transferred directly to one of Tom Girardi’s creditors, California Attorney Lending II Inc., which has already filed a $6 million lawsuit against the 83-year-old man and his firm. The remaining 20 percent will allegedly go to unsecured creditors with similar claims.

However, Tom Girardi’s family seemed to be fighting against some items being part of the auction. In July, Radar Online reported that his brother had applied for release on his behalf. He wanted to remove most of his furniture sets, as well as Steinway. But clearly not in his favor.

However, this is not the first auction attempt to help the former prosecutor to return the money owed. Back in August 2021, several other high-value items were put up for sale, such as a poster signed by Julie Roberts for the 2000 film Erin Brockovich, which was based on the now defunct Girardi law firm & Keese, as well as other memorabilia. But it was the underwear items also included in the lot that confused Erica Jane at the time because she claimed they weren’t even hers.

There is also the issue of Erica Jane’s $1.4 million earrings, which she reportedly refused to hand over to a trustee who was appointed to handle bankruptcy lawsuits and auctions. (A paper trail allegedly showed that Tom Girardi received funds from a drug deal at the firm to buy them.) The Real Housewives of Beverly Hills graduate fought for the earrings in court, but eventually the judge ordered her to give them back because they were technically considered “stolen property”, did she know about this at the time of their receipt or not.

Lawsuits continue to pile up elsewhere against Erica Jane and her ex. The ex-girlfriend of actor Nicolas Cage is suing the couple for hundreds of thousands of dollars. There is also a civil lawsuit for $ 5 million, in which, according to the TV presenter, money is being extorted from her. Similarly, she received a $50 million class action lawsuit on her way back from vacation. And she apparently owes several million in tax arrears, in addition.

So, overall, it looks like these legal issues are still largely unresolved. Although you couldn’t tell too much about the current twelfth season of The Real Housewives of Beverly Hills. Erica Jane called the situation a “disgrace” in one of the episodes, but also hinted that some statements were or will be found to be erroneous. To find out more, check out the new episodes that will be broadcast on Wednesday nights on the Bravo channel or the next day on the Peacock Premium channel.

Why RHUGT Fans Still Fear the Return of Phaedra Parks