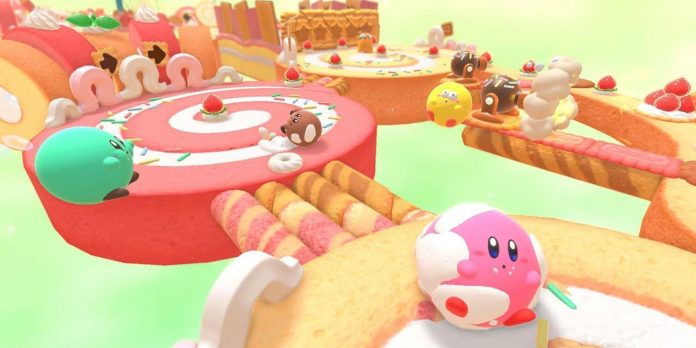 The Kirby series has always been a repository of experimental spin-offs that have been treated with amazing attention. Even once Kirby’s Avalanche and Kirby’s Dream Course were noteworthy games, and Kirby has only expanded thanks to several touch-controlled games and several varieties of fighting games. Kirby’s only GameCube game was Kirby’s Air Ride, and no one who played the game would blame it for a lack of content. It seems that the tendency of Kirby games to introduce a large number of mini-games for other games is a recursive cycle, which could lead to the creation of Kirby’s Dream Buffet.

This fast-approaching competitive multiplayer game will be the next spin-off in the Kirby series after the famous Kirby and the Forgotten Land main game. Kirby’s Dream Buffet begins with Kirby shrinking to tiny sizes with a Fork of Dreams, which gives him the perfect opportunity to gorge on titanic desserts. Three other Kirbys appear along with Master Hand, Crazy Hand, and several Waddle Dee, and the four puffy ones start competing to see who will eat the most. It is clearly based on the classic Kirby Super Star Gourmet Race mini-game, but also draws a lot of obvious inspiration from the modern competitive multiplayer game Fall Guys.

Anyone who has seen Fall Guys in action, it’s hard not to draw a few parallels with Kirby’s Dream Buffet. Both games are made from the same fabric, and both focus on multiplayer action and similar colorful art styles. Kirby’s worlds consist entirely of dessert, while Fall Guys scenes can be made of anything from similar sweets to woodlands and abstract shapes and machines. Kirby and the Fall Guys beans look the same, and both can be heavily modified with costumes and colors unlocked during the game.

This game is intentionally simple, and most of the responsibility is placed on movement and jumping with intentionally awkward controls. The Fall Guys characters walk everywhere and can get in each other’s way by blocking bodies and grabbing them, while all four Kirbys rely on rolling, as in some past Kirby spin-offs. Kirbys can also attack each other, but in their case they can use power-ups based on Kirby’s copying abilities. While these abilities may seem more destructive than the mundane push in Fall Guys, they won’t be able to instantly stop another Kirby from winning.

Kirby’s Dream Buffet and Fall Guys may have a lot in common, but they highlight the huge differences between the two games. The first and probably most important thing is that Kirby’s Dream Buffet is not a battle royale and maybe not even a live game. Despite the fact that this is a competitive party game with the same general structure of races, mini-games and some kind of final test, only four people per match participate in it. Unlike Fall Guys, these players cannot lose a match until the final results are summed up. The goal is to collect as many strawberries as possible, and not just take the highest place to advance to the next round. A high place gives more rewards, but neither this nor knocking a player off course does not guarantee his failure.

Kirby’s Dream Buffet always alternates between racetracks, in which the main focus is on collecting strawberries and bonuses, and mini-games in which Kirby competes for strawberries. Fall Guys, on the other hand, almost always starts with a simple race and then jumps between a variety of specialized courses that can do anything from dividing players into teams to forcing them to solve logic puzzles. The final rounds of Fall Guys are also varied, while Kirby’s Dream Buffet always ends with a Super Smash Bros. match hybrid. and the Bumper Balls games from Mario Party. Combined with the ability to play offline with another player, Kirby’s Dream Buffet is a generally more structured and relaxed take on the chaotic and tense parties of Fall Guys Battle Royale.

Kirby’s Dream Buffet will be released on August 17 exclusively for the Nintendo Switch.

Kourtney Kardashian revealed that she was infected with COVID-19 for the...