Home Entertainment How does Every Gotham Knights Character Differ in Combat 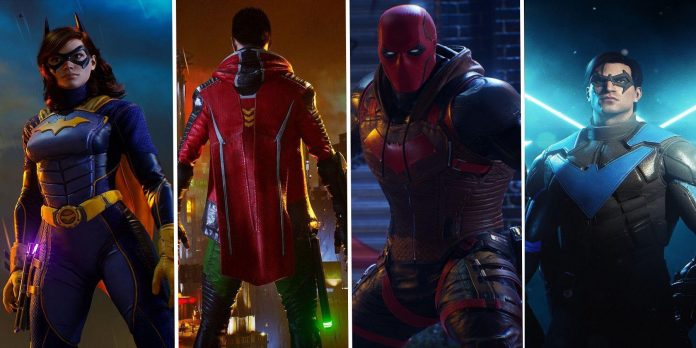 Gotham Knights will give players access to a variety of play styles via the four members of the Bat Family, Robin, Batgirl, Nightwing, and Red Hood. With each knight giving players unique gameplay, fans will need to carefully select the knight based on how they will want to play the game. From stealth strikers to heavy-handed tanks, Gotham Knights gives fans the ability to experience combat in four different ways, improving the gameplay variety and even encouraging players to team up with others to see how different knights fight.

Each of the knights has their own specialty in combat that players will be able to experience, and the types of missions they go on will determine which knight would be best. Robin focuses on stealth gameplay thanks to his numerous gadgets that can distract or confuse enemies. Red Hood relies more on his physical prowess and strength to take out enemies and his guns can be used for crowd control. Nightwing bounces around the battlefield inflicting quick damage to multiple enemies, making him a harder target. Finally, Batgirl’s balanced play style allows her to excel at both melee and stealth combat, and her quick attack speed makes her perfect for newcomers to this style of game.

Robin’s gameplay has showcased that his character will rely more on stealth and distractions than the others, with most of his gadgets allowing him to stun or confuse his enemies long enough for the player to enter stealth gameplay. From his invisibility suit that will allow him to walk past enemies to his slingshot’s stun shot that will momentarily blind the enemies, Robin is the perfect character for any player that wants to experience a stealth playthrough in Gotham Knights. Outside of stealth, however, Robin has his trusted staff that he can wield to take out enemies quickly if he is spotted.

At the heart of Robin’s combat is his numerous gadgets, and since he is a genius hacker, his gadget variety will likely be the most in the game. Robin can use his staff to block incoming bullets while charging the enemy to close the distance to the biggest threats first, which could mean that Robin players will focus on single enemies rather than bouncing around a group. Because of this, Robin could get overwhelmed easily by larger groups or groups with tougher enemies, which is probably why Gotham Knights will classify him as a stealth attacker.

Out of all the knights, Batgirl seems to be the one whose gameplay will most closely resemble that of Batman from the Arkham games. She also seems to be the most balanced knight in terms of combat thanks to the blend of stealth and melee attacks, again similar to Batman. With her tonfa, she is able to deal a lot of quick damage to a single enemy before pushing away and focusing on another, which could make her perfect for players who enjoyed the Arkham style of combat.

Her main gadget calls in a swarm of bats that will surround her during combat, allowing her to either move back into stealth or keep enemies at bay as she takes them out. She also seems to have the fastest strikes giving her the best DPS than the other characters and her movement abilities ensure that she can maintain an onslaught on a single enemy even if they are pushed back. Whether they are a fan of the Arkham games or simply a newcomer to this style of gameplay, fans will definitely have a lot of fun patrolling the streets with Batgirl in Gotham Knights.

RELATED: Gotham Knights Should Still Get Four-Player Co-op At Some Point

Nightwing’s entire origin seems to be perfectly captured in his fighting style which allows him to use his acrobatic skills that he gained as a member of the Flying Graysons to bounce around the battlefield and deal strikes to multiple enemies. This makes Nightwing the perfect knight for taking on larger groups of enemies since he can quickly strip away the health of multiple enemies. Along with his two escrima sticks, he can also deal shock damage that could paralyze certain enemies or stun multiple enemies, making it easier for players to handle the bigger groups.

While there was no real stealth gameplay revealed for Nightwing, he likely has the basic stealth abilities as Batman in the Arkham games, allowing him to takeout enemies by sneaking up to them. However, unlike Robin and Batgirl, he will likely not have a lot of gadgets that will allow him to fall back into stealth. This means that players who opt to play as Nightwing will likely be focusing on his acrobatic combat rather than stealth.

Red Hood is one of the most versatile knights thanks to his mixture of long-range and melee combat that will allow him to excel against the bigger enemies. Further, his abilities, such as the barrage shot, will allow him to strip off the armor on the bigger enemies, making them easier targets. Along with this, following his resurrection from the Lazarus Pit, he has gained spirit powers, including some type of spirit shot that allows him to take out multiple enemies at once.

Red Hood will most likely be the heaviest hitter among the four knights, and because of his big build, he will not be able to move quickly around the battlefield like the others. However, thanks to his two guns, he can still damage multiple enemies while maintaining a safe distance from bigger enemies. It is more than likely that Red Hood will not have a lot of stealth gameplay, and so any player that picks Red Hood should be prepared to immediately engage in battle rather than take out enemies from the shadows.

With all the options available to players in Gotham Knights, figuring out what knight will best fit their play style could prove to be instrumental at the start. However, each of the knights seems to provide a fun way to take out enemies and explore Gotham City, and the ability to freely switch to another knight makes the choice less damaging if fans think they picked the wrong character. While players may not have the freedom to make Robin a tank or Red Hood a quick-hitting DPS character, specializing in each knight’s combat prowess will likely take time and make experimentation much more worth it at the start of Gotham Knights.