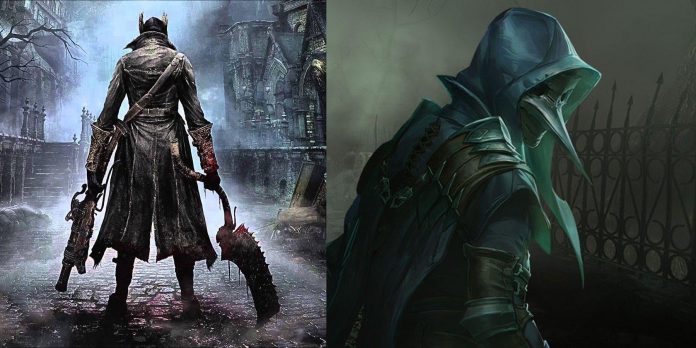 Announced back in March 2021, Thymesia quickly went viral with an eye-catching trailer that instantly intrigued fans of FromSoftware. The announcing trailer didn’t reveal much, but Thymesia’s gothic setting, challenging action-RPG-style gameplay, and overall darker tone immediately set it apart, and Bloodborne fans were especially excited. At first glance, these two games have several similarities, with the main comparison being their similar artistic styles, but if you tear off the surface, you will find many similarities.

One of the main areas of comparison between Thymesia and Bloodborne are the main characters of the games. In Thymesia, players take control of Corvus, a plague doctor tasked with clearing the kingdom of the infected population. In Bloodborne, the player plays the role of a Hunter looking for distraught animals in Yarnham and killing them. But the comparisons between the two main characters are much deeper.

Comparison of Corvus from Thymesia with Hunter from Bloodborne

Corvus and Hunter share a common goal, albeit in different contexts. Both of their respective worlds have been invaded by an otherworldly infection that has turned its inhabitants into wild monsters, and now they are tasked with finding the source of the outbreak and eliminating it, restoring order to the world again.

In Timesia, the kingdom to which Corvus belongs once flourished thanks to innovative alchemical science, which was used to develop almost all technologies and practices. First of all, alchemy was used to treat the inhabitants of the kingdom and repel the plague, but because of the arrogance of the rulers, this higher power was abused, which eventually led to what it was intended to protect against. Now the inhabitants of the kingdom are infected with an otherworldly plague that has turned them into cruel monsters.

Yarnham from Bloodborne suffered the same fate, only instead of alchemy it was blood magic. Discovered by the scientists of the College of Burgenwerth, Old Blood was used to develop the medicine of the society. However, some scientists believed that it could be used for the evolution of mankind. Since Ancient Blood came from ancient gods, scientists knew frighteningly little about its use, but that didn’t stop them from experimenting with it. Eventually, this led to an outbreak known as the “Beast Scourge”, as a result of which the citizens of Yarnham turned into beasts.

Like a Hunter, Corvus is only human, so while he may have powerful abilities, he is not invulnerable. Thus, Corvus must use his evasion and parry abilities to gain the upper hand in battle. To fend off larger opponents, Corvus uses the raven’s throwing feathers, just as the Hunter uses his mercury bullets and firearms. While Corvus continues to fight the infected townspeople, he charges the plague damage meter, which allows him to deal crushing combos and finishing blows to his enemies. These finishing moves are strikingly reminiscent of the Hunter’s weapon transformation attacks, as well as their retaliatory strike, although Corvus’ attacks fill his weapon with an ominous green glow.