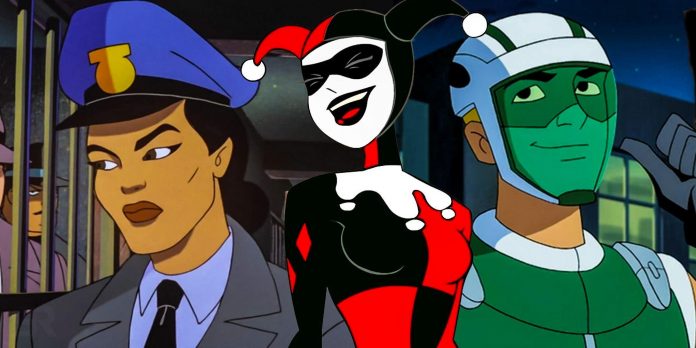 DC Pride’s ever-expanding and increasingly colorful covers feature LGBTQ+ icons, but DCAU has created some of its best queer characters. Adaptations of comic books like Batman, Superman, and Justice League, DC cartoons have taken away more than their share of creative freedoms, and brought back much more. Reimagined and original characters have become one of the best reasons to celebrate DC Pride Month because of their breakthrough debuts on Saturday morning.

DC comics received cartoon adaptations at least as early as the 1940s, when Fleischer’s cartoons about Superman premiered. Over the years, countless animated films, TV shows and short films based on popular DC films have become the cornerstone of the franchise. However, since the 1990s, D.C. TV shows have pushed the boundaries of what could be shown on a Saturday morning. Originally named “DCAU” (DC Animated Universe) to denote the continuity established by Batman: The Animated Series, it has become a catch-all term for more modern DC animation projects.

Even before such shows as “Batwoman”, “Legends of Tomorrow” or “Peacemaker” aired, DC gained popularity thanks to their cartoons. Using shows like Batman: The Animated Series to create new knowledge, many of the diverse actors created for these shows proved popular enough to become a comic book canon and later prove themselves as proud members of the LGBTQ+ community. It was a tradition that went far beyond the original DCAU and spread to animation projects such as Young Justice. However, as DC continues to reinvent new characters and surpass previous Pride celebrations, it’s time to remember that many beloved members of DC’s LGBTQ+ community were originally created for the small screen, and they had to go a long way to get out on screens.

Debuting in 1992 with gay actor Kevin Conroy in the title role, “Batman: The Animated Series” was just one of many cartoons based on comic books that hoped to break the traditional formulas of the children’s show. Like the animated adaptations of X-Men and Spider-Man, DC’s new Batman series has tried to tell more mature stories and assert its individuality. With Batman: The Animated Series introduced new characters inhabiting Gotham City, and among them were the origins of the most beloved influential LGBTQ+ couples in the District of Columbia.

The clown queen of crime Harley Quinn is one of Gotham’s most iconic con artists. Based on actress Arlene Sorkin and created for Batman: The Animated Series as the Joker’s partner in crime, the character later turned out to be bisexual and had a relationship with the supervillain Poison Ivy. Although much of their relationship was later revealed in the comics and the ongoing animated series about Harley Quinn, the seeds of their relationship were sown on Saturday morning. “Batman: The Animated Series,” Season 1, episode 47 “Harley and Ivy” brought the couple together for the first time and helped make them Gotham’s favorite LGBTQ+ couple as they reunite for future episodes before finally becoming canonical in comics.

Renee Montoya, created for Batman: The Animated Series, was one of Gotham’s honest law enforcement officers who worked with Commissioner Gordon and Harvey Bullock. Although Montoya was intended for television, Montoya prematurely premiered in print before her debut on the small screen, and she became a fan favorite, named by Wizard and IGN as one of the best comic book characters. Although it was originally written that he had a husband who died in the line of duty, Montoya adopted the vigilante persona as an issue and had a relationship with Batwoman in DC comics. Since then, Batwoman and Renee Montoya have become one of the most famous LGBTQ+ couples in the District of Columbia.

In the early 2000s, the DC animated universe branched out in new and unique ways that were unimaginable. Shows like Batman Beyond and Justice League Unlimited continued the world started in Batman: The Animated Series. However, at the time, DC also adapted Milestone’s “Static Shock,” a show that explored different characters and related themes, touching on concepts such as racism, grief, and gun violence. However, Static Shock was one of the first DC cartoons to confirm a canonical gay character created for the show while it was still airing.

Based on Milestone characters Rick Stone and Frida Goren, Richie Foley was Virgil Hawkins’ best friend and confidant created for the series. Starting with the delightfully nerdy IT guy Static and eventually turning into a super-intelligent Gear superhero, his late creator Dwayne McDuffie made the character gay (via MilestoneWorld — warning: trigger language in the comments). Although the show could only subtly hint at his sexuality, Gere’s public recognition by his creator was a big step towards representing LGBTQ+.