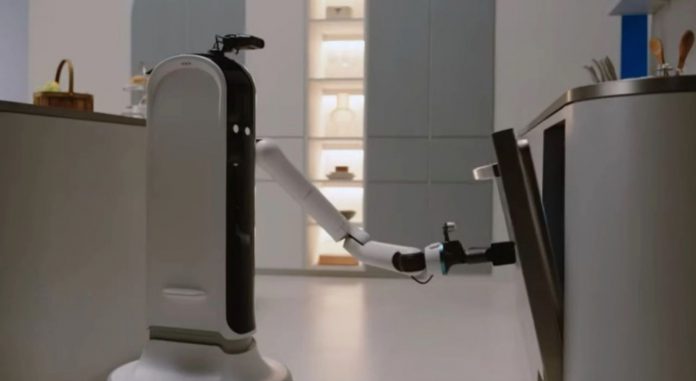 Much smarter than robot vacuum cleaners and designed to perform many tasks, Samsung’s new home robots look great. These robots, which are not very aesthetic in terms of design, manage to influence their abilities. Home robot Samsung Bot Hardy can not only clean the house but also freshen your glass.

Samsung introduced several robot models. Bot Handy, one of them, stands out with his abilities. The device that puts the dirt in the dishwasher can also do other jobs when necessary. Robots, one of the indispensable technologies of CES, started to appear. In CES 2021, the remarkable home robot move came from Samsung.

Introducing its robot with a short promotional video in its virtual event, Samsung made different touches. First of all, Samsung introduced three new robots. These robots can collect messy items in the house. In addition, they can execute commands as personal assistants. Currently, only one of the robots will be on sale in the USA. This robot with a security camera functions as a vacuum cleaner.

Focusing on developing home technologies, Samsung has designed advanced home robots for the year 2020, when people spend more time at home. By providing artificial intelligence support to Samsung robots, it enables them to act on their own.

Making a name for itself with its investments on the IoT side, the South Korea-based company emphasizes the interaction of devices at this point. Emphasizing the future of voice command technology thanks to microphones added to the devices in order not to be tied to the phone screens, Samsung designed Bot Handy for this purpose.

This robot can pick up objects that are higher than the ground, for example by lying on a shelf. It knows how much clamping force will set according to the type of these products. The robot, which is reported to carry out the commands given quite easily because it is equipped with artificial intelligence, has cameras of different sizes and functions. This robot, which has a different design, is currently under development.

Other robots announced besides Bot Handy:

JetBot 90 AI Plus: This new vacuum cleaner with LiDAR and 3D sensors has been developed to provide the best cleaning solution.

Samsung Bot Care: This device, also called robot assistant, is designed to help you with daily work at home, as well as remind you of your daily exercises and appointments.