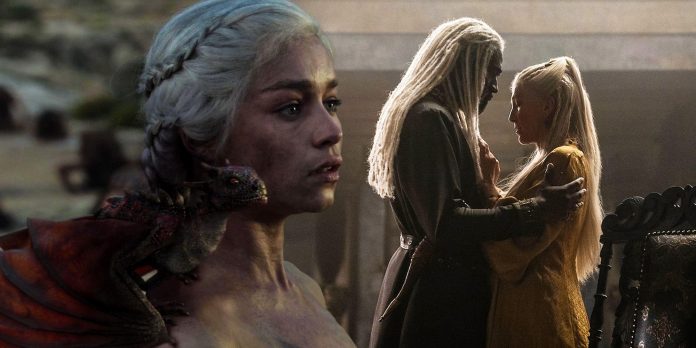 House of the Dragon’s fiery civil war will finally put a common misconception about Game of Thrones‘ Daenerys and the Targaryens’ fire resistance to rest. The magical and supernatural aspects of Game of Thrones have often caused misinterpretations among audiences, with the Targaryens’ true relationship with fire and dragons being one of the most notable errors. Alongside some believing Targaryens are immune to fire, Game of Thrones’ confusing details include Jon Snow’s warging abilities, whether Jon is immune to aging after being resurrected, and if the Night King is responsible for Westeros’ harsh winters.

Before HBO’s House of the Dragon prequel, Daenerys Targaryen was the only significant representation of the history of House Targaryen in Game of Thrones. While Game of Thrones would include lore about Targaryens like the Mad King, Rhaegar, and Aegon the Conqueror as well as depictions of Viserys Targaryen and Jon Snow (whose true name is Aegon Targaryen), most of the information gleaned about the Targaryens came from Dany’s character. As such, it’s unsurprising that some of Daenerys’ supernatural miracles were seen as attributable to the entire Targaryen family line rather than simply a one-time miracle.

Game of Thrones’ season 1 finale created such a notable misconception about Daenerys and House Targaryen’s abilities that even George R.R. Martin had to address it, as the situation was critical to Dany’s storyline. Game of Thrones’ season 1 ending sees Daenerys walk into Drogo’s burning funeral pyre holding her dragon eggs, with it at first appearing that Dany has perished. However, once the fire burns out, Daenerys appears unburnt and unharmed, with her dragons officially hatched. Many fans interpreted this scene to mean that Daenerys was immune to fire, with other details seemingly hinting that all Targaryens share this ability. However, Daenerys is not, in fact, resistant to fire, nor are the rest of the Targaryens – a fact that House of the Dragon’s war will prove time and again.

Daenerys surviving the fire completely unharmed at the end of Game of Thrones season 1 suggested that her Targaryen family blood allowed her to leave unburnt. Also contributing to this misconception is Game of Thrones’ season 1 scene in which Dany enters scalding hot water with little to no reaction. Targaryens are known for their close association with dragons, which are the family’s sigil and have familial bonds similar to the Starks with their direwolves. However, it’s believed that the Targaryens have an even more peculiar connection to the creatures, with the family line being notable for having the “blood of the dragon.” Considering dragons are fireproof to a certain extent, this association has led many fans to believe that all Targaryens themselves are immune to the effects of fire, which isn’t actually the case.

Just as the Starks form unique bonds with their direwolves, Targaryens are closely attached to their dragons, with many members of the family having had dragon eggs placed in their cradles as infants. “Blood of the dragon” does not, however, refer to the Targaryens literally sharing blood with these animals. The phrase is meant to signal House Targaryen’s origins in Valyria as one of the many dragonlord families, which is where Dany’s ancestors originally formed their close relationship with the scaled creatures. “Blood of the dragon” has come to symbolize the Targaryens’ fiery demeanor, ability to tame and ride dragons, and their noted magical bond with the creatures. The blood of the dragon also isn’t exclusive to the Targaryens, as House of the Dragon’s Velaryons also descended from Old Valyria, sharing the Valyrian physical features and ability to tame and ride dragons.

Why Daenerys Wasn’t Burnt By Fire In GOT Season 1

Although the Targaryens are not inherently fireproof, Daenerys being unburnt in Game of Thrones season 1 primarily caused this misinterpretation. Game of Thrones season 1 had actually already proven that Targaryens weren’t resistant to intense heat before Dany’s unburnt moment, as her brother Viserys had died when Khal Drogo poured molten silver on his head. The reason why Daenerys wasn’t burned by fire is that the birth of her dragons was an extraordinarily unique, magical miracle that allowed her to escape a fiery death.

Related: Game of Thrones: How All The Targaryen Dragons Died (Before Daenerys)

When author George R.R. Martin confirmed that neither the Targaryens nor Daenerys are immune to fire, he explained that it would be highly unlikely for Dany to be able to survive such an event again. In the books, Daenerys is burnt and blistered by flames from Drogon, with her hair actually being burned off during the moment that inspired Game of Thrones season 1’s unburnt scene. The magic in Game of Thrones’ world is largely unexplained, but certain miraculous moments like the birth of Daenerys’ dragons allow the characters to impossibly escape death. The births of Drogon, Rhaegal, and Viseryon marked the first new dragons in Westeros since the reign of Aegon the Broken approximately 150 years before Game of Thrones’ timeline, with Daenerys’ entire reign being marked by magically inexplicable occurrences.

As Game of Thrones’ franchise returns to House Targaryen in full force, many misconceptions about the family will be resolved for viewers. For those who haven’t seen George R.R. Martin’s confirmation about the Targaryens’ relationship to flames, House of the Dragon’s fire-heavy Targaryen civil war will be visual proof. With Targaryens fighting on both sides of the Dance of the Dragons, the fire of the magical creatures will be used as weapons against all who share the “blood of the dragon.” House of the Dragon’s dark ending will be the most significant example of the Targaryens’ susceptibility to burns, as Aegon II Targaryen will order his dragon, Sunfyre, to burn and eat his sister Rhaenyra Targaryen in the final stage of the war.

Aegon II Targaryen himself had suffered severe burns during a dragon battle with Rhaenys Targaryen, which left him incapacitated for a significant amount of time. During the same fight, Aemond Targaryen’s dragon burned Rhaenys Targaryen to death, with the blackened body of the Queen Who Never Was being found next to that of her dragon. The daughter of Daemon Targaryen, Baela Targaryen, would also be burnt during a dragon battle, proving the Targaryens from Game of Thrones and House of the Dragon can all die or be maimed by fire. This Targaryen rule will also apply to Jon Snow in his spinoff series unless he has found another magical way to resist the effects of flames.