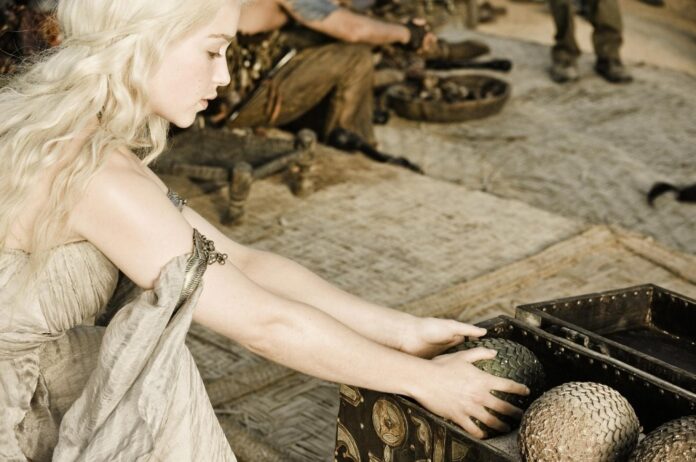 The Game of Thrones spin-off House of The Dragon could solve this mystery about the origin of dragons and their acquisition.

As the Game of Thrones spin-off, House of the Dragon, unveils its first images, many fans are wondering what the heart of the HBO series will be more exactly. If we know that it will take place 300 years before the events of the show event created by David Benioff and DB Weiss and will focus on House Targaryen, the series should also allow us to learn more about the origins of dragons. . Introduced in the first season, it is unknown where exactly these fantastic creatures came from and how Illyrio Mopatis acquired the eggs given as a wedding gift to Daenerys.

A question that has remained unanswered since the first episodes but to which House of The Dragon could provide an answer. Indeed, although Illyrio explained that he had obtained them in the Shadowlands beyond Asshai, where the dragons presumably originated, it is possible that the latter also have a connection with Lady Elissa Farman, the beautiful one. -sister of Rhaena Targaryen, daughter of King Jaehearys, to whom the three eggs belonged. The two young women formed a strong friendship until Farman asked Rhaena for money in order to build a boat. Dreaming of travel and adventure, Farman however saw her request refused, the rejection of her friend then prompting her to steal the dragons and flee to Braavos where she sold the eggs in exchange for a ship.

Remained in the hands of the Lord of the Seals, it is not known what really happened to the dragons thereafter. However, it is possible that their eggs were traded numerous times during the century between Braavos and Pentos, which may have ultimately facilitated their acquisition by Illyrio. If we still do not know if the three eggs stolen by Elissa are the same as those offered to Daenerys in Game of Thrones, remains that the spin-off will focus more on the reign of Viserys and not of Jaehaerys. So, while Elissa is not expected to appear on the show, it’s possible that the latter will reveal her story and the stolen dragon eggs will appear along the way. Perhaps they have already fallen into someone’s hands at Pentos or Essos. Perhaps they were passed on by the Lord of the Seals of Braavos to his children. Regardless, it would not be surprising if the mystery of their origin and more specifically their acquisition by Illyrio is part of the plot of House of The Dragon. A mystery that we look forward to discovering while the prequel of Game of Thrones could also answer many questions …

Fortnite Winter Trials: How to Get Free Rewards

Godzilla vs. Kong is delayed a few days

Galaxy S21: who will be able to use to unlock their...