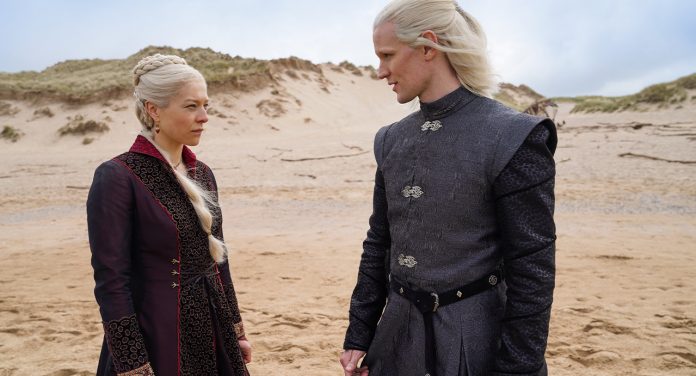 House of the Dragon images are coming. The House of the Dragon, which tells the history of Game of Thrones, adapted from the books of George R. R. Martin by US-based media company HBO, continues to shoot at Holywell Bay Beach in Cornwall. Princess Rhaenyra Targaryen, Prince Daemon Targaryen, Lord Corlys Velaryon (The Sea Snake), Alicent Hightower and Otto Hightower are featured in the shared frames.

House of the Dragon series will take 300 years back

The characters in the cover image of House of the Dragon, Emma D’Arcy, will play the role of Princess Rhaenyra Targaryen. King’s first child. Our cracker comes from pure Valyrian blood and is a dragon rider, while famous actor Matt Smith will play the role of Prince Daemon Targaryen. Daemon, the younger brother of King Viserys and heir to the throne, is a unique warrior and dragon rider with the blood of Valyria.

Steve Toussaint will play the role of Lord Corlys Velaryon. The lord of House Velaryon, of the Valyrian lineage as old as House Targaryen, is the most famous sea adventurer in the history of Westeros.

Olivia Cooke will play the role of Alicent Hightower. Daughter of Otto Hightower, Hand of the King, and the most beautiful woman in the Seven Kingdoms. He grew up in the Red Keep close to the king and his entourage. The character has elegance and a sharp political acumen.

Rhys Ifans will play the role of Otto Hightower, Hand of the King, who has a duty of loyalty to both his king and his kingdom. The veteran actor has acted in productions such as Harry Potter and the 2012 Spider-Man in the past.

Produced by Miguel Sapochnik and Condal, the House of the Dragon will be directed by Clare Kilner and Geeta V. Patel.

Dying Light 2: Stay Human, Is It Necessary To Play The...

Shazam! Star Zachary Levy shared his feelings about the trial of...