Home Entertainment House of the Dragon: First Images of The Spin-Off of Game of... 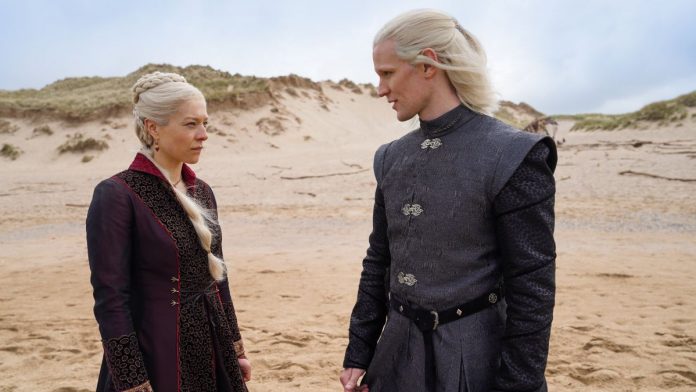 House of the Dragon: The new series is a prequel that will explore the origins of House Targaryen, the same one that Daenerys belongs to.House of the Dragon is the first of the Game of Thrones spin-offs to start production. This was announced by HBO itself on the series’ official Twitter account. A few days after that announcement, those responsible for the fiction have shared the first snapshots, already with the characterized actors. They have done it in a series of tweets, which you can see just below these lines.

In the images we can see characters like Princess Rhaenyra Targaryen and Prince Daemon Targaryen, both with their characteristic platinum blonde hair color. Also featured are the Lake Serpent, Alicent Hightower, and Otto Hightower. All these characters will arrive on the small screen at some point in the year 2022, although at the moment they have not announced a more specific date. With the filming already started, we will still have to wait to enjoy a trailer.

A prequel to Game of Thrones

The series is based directly on the book Fire and Blood, written by George R.R. Martin. As for the story, it will take place 300 years before Game of Thrones, so we will discover a completely new cast of characters. House Targaryen is the clear protagonist, so we will discover characters such as King Viserys Targaryen, Lord Corlys Velaryon or the aforementioned Targaryen princes, among many others.

House of the Dragon has been created by George R.R. Martin and Ryan Condal, while Miguel Spochnik will also be one of the showrunners. The latter will direct the pilot and other additional episodes. Written by Sara Lee Hess, Vince Gerardis, and Ron Schmidt, the first season will have 10 episodes. The cast includes actors such as Paddy Considine, Olivia Cooke, Matt Smith, Emma D’Arcy and Fabien Frankel, as well as Rhys Ifans, Steve Toussaint, Eve Best and Sonoya Mizuno. The game of thrones begins again.