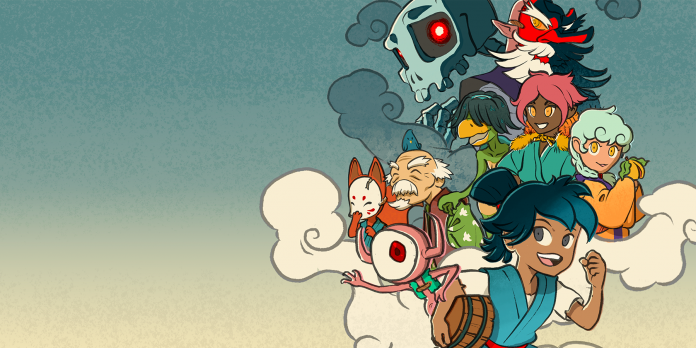 Whitehorn Games, the indie publisher of fan-favorite games like APICO, Wytchwood and Lake, is working with developer Waking Oni Games to release a new arcade hot spring management game called Onsen Master next month. Players can look forward to visiting the cool waters of Izajima Island as the main character of the game Mu, a student of the missing keeper of the hot springs. Onsen Master will be available on September 1, 2022 for Xbox Series X|S, Nintendo Switch and PC via Steam.

Onsen Master is an arcade-style co-op game for one and two players, where players can manage the customers of their hot springs and prepare the right ingredients to treat their ailments. The multitasking of Overcooked and other similar games comes to mind, as players will have to combine various tasks to maintain the efficient operation of hot springs. Running around hot springs, picking up wandering customers and adding the right mixtures to the right baths can already be hectic enough, but the troublesome yokai also seem to interfere with excellent player service.

The Youkai add an element to the game reminiscent of a Yokai Inn hotel game with spirits, as mischievous spirits called youkai rage in the island’s hot springs. Onsen Master has several key features that deserve attention. Spring Fling is a short cute story for two players, which tells about the island of Izajima in the style of a visual novel with a cute anime aesthetic.

“The customer is always right” allows players to skip the plot and immediately immerse themselves in arcade mode. Players can choose from 6 levels of hot springs to test their customer service skills. The Heat is On allows players to challenge others in competitive multiplayer mode on the couch, where each of them must work to manage their clients in one hot spring. And finally, Spa Music is an original soundtrack full of melodies similar to a feudal fairy tale, composed by Dorrell Etienne.

Whitehorn Games is an independent game publisher specializing in pleasant, cozy games that can be played in parts that do not require special skills or knowledge and that everyone can pick up and play. This is the publisher of APICO, a game that really celebrates coziness, comfort and serenity. Whitehorn Games works closely with developer, Waking Oni Games, an independent studio led by BIPOC, creating experiences designed to inspire underrepresented voices by exploring cultural intersections, media and nostalgia.

These management-style games are useful for players seeking to improve their time management skills or work on other executive skills, once again demonstrating that the game has advantages that go far beyond simple entertainment. Players can expect to receive the Onsen Master next month.

Onsen Master will be released on Nintendo Switch, PC and Xbox Series X|S on September 1, 2022.