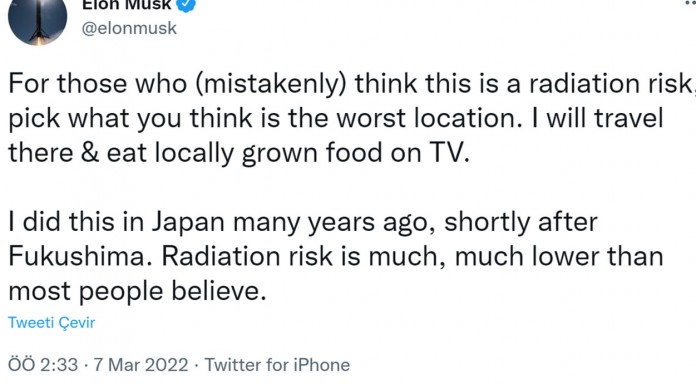 Elon Musk, the founder of SpaceX and Tesla companies, made a call to Europe and said that nuclear power plants should be reactivated. While arguing that this is better for global warming, Musk also brought a new breath to the radiation debate.

While it continues to be discussed how safe and efficient nuclear energy is today, an important sharing came from Elon Musk today. Despite the statements that countries will move away from hydrocarbon energy and contribute to the environment, while the trend towards alternative energy sources is still quite slow, Musk argued that Europe should switch to nuclear energy.

Elon Musk, who shared on his Twitter account, said, “Hopefully, it is understood that Europe needs to restart inactive nuclear power plants and increase the power output of existing ones.” made statements. Musk also said that the transition to nuclear power is “critical to national and international security.”

“I will watch food grown where there is radiation on TV”

After that, Musk made a highly controversial comment about the radiation that may arise in possible nuclear disasters. In another tweet on the subject, Musk said, “For those who (wrongly) think that this is a radiation risk, pick where you think is the worst place. I will travel there and eat locally grown food on TV. I did this years ago in Japan, shortly after Fukushima. The radiation risk is much lower than most people believe.” used the phrases.

The series to be linked to the Dark Justice League