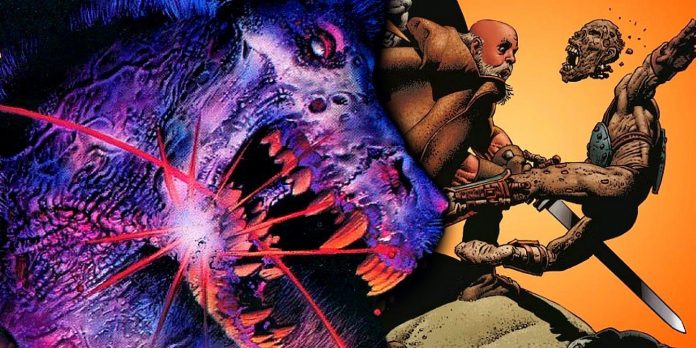 The dark world and hangout of legendary horror movie creator Richard Corben is getting a deluxe hardcover reissue, courtesy of Dark Horse Comics. Richard Corben, who unfortunately passed away in December 2020, was one of the most outstanding and visionary artists in the genre of fantasy, science fiction and horror of his time. Comic book fans around the world have come to love Corben for his work on projects such as Ghost Rider (with Daniel Way), Punisher: The End (with Garth Ennis), Hellblazer (with Brian Azzarello) and Mike Mignola’s Hellboy. Korben was also an accomplished artist, known, among other things, for the famous album cover “Bat Out of Hell” by Meat Loaf, as well as the covers and interiors of dozens of anthological publications such as Heavy Metal, Eerie, Creepy and 1984.

But Corben was also responsible for a huge number of unique horror comics owned by the creators, many of which have achieved legendary status among fans. From the very beginning of his career, Corben was a renegade, his works were often criticized for being overly sensual or intimidating, and his independent works always reflected this rebellious sensibility. His infamous early work “The Bloody Star”, in which a fantastic fairy tale written by Robert E. Howard, combined with Corben’s very detailed and action-packed drawings, was one of the first comics to be called a graphic novel.

It was on the pages of Heavy Metal that many readers first met Korben, where his story Den: Neverwhere was split into twelve parts. In fact, “Den: Neverwhere” (which first appeared independently in 1973) It was the first full-length film in the first issue of the legendary-controversial anthology title in 1977, and later became the basis for the classic segment of the 1981 animated film Heavy Metal. movie. Now, thanks to a recently announced partnership with Dark Horse Comics, “Den: Neverwhere” is one of two out—of-print Corben games that fans will be able to buy next year, along with Corben’s more recent dark barbaric fantasy, “Murky World.” With this announcement, Dark Horse is launching a new exclusive publishing line dedicated to the work of Korben, for whom Murky World and Den: Neverwhere are just the beginning. The release was announced by CBR.

Both books, which have been out of print for a long time, will be released in a luxury hardcover, starting with “Mura of Darkness”, which will be available in comic book stores on April 26, 2023 and in bookstores from May 9. The story, originally published in 2012, will be released at a price of $39.99 and will include an introduction by Mike Mignola, one shot of Corben from Dark Horse Presents and exclusive new bonus material.

Soon after, it will be followed by Den: Neverwhere, which will celebrate its 50th anniversary with a new luxury edition that will be released in comic book stores on July 26, 2023 and in bookstores on August 8. Den: Neverwhere, a fully—drawn graphic novel inspired by the works of Edgar Rice Burroughs, combining elements of black comedy, horror, fantasy and science fiction. This new edition promises restored art and an introduction by Jose Villarubia, new lettering by Nate Piekos of Blambot, and a brand new introduction by comedian and comic book fan Patton Oswalt. The synopsis of Dark Horse reads:

Horror comics fans will be delighted when Richard Corben’s Lair: Nowhere and The Dark World appear next year, and newcomers to Corben’s explosive work will get the perfect starting point thanks to Dark Horse comics. Richard Corben’s bibliography is extensive, so Dark Horse will probably have a lot of materials to publish in the coming years — no doubt, long-time fans and newcomers will be interested in seeing the master’s work in a new light.