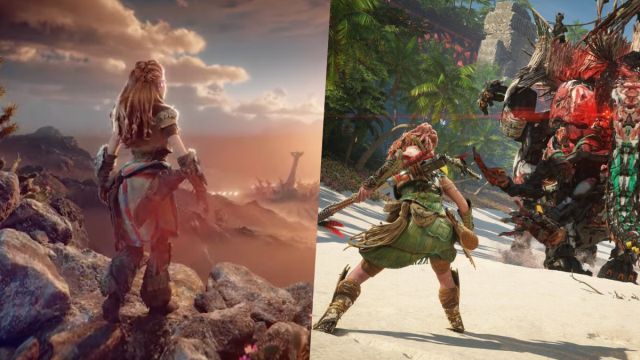 Horizon Forbidden: The new Guerrilla Games production will allow Aloy to interact with rocks and mountains in a more natural way. Aloy will return soon with a new adventure. Horizon Forbidden West is in development for PS4 and PS5, so Guerrilla Games continues to work to fine-tune all of their systems. One of those that will change from Horizon Zero Dawn will be scaling, which will now be simpler, more intuitive and natural. This has been confirmed by director Mathijs de Jonge in an interview with GameInformer, where he has roughly detailed how it will work.

“Now you are completely free to climb any rock, mountain or cliff,” he says. According to the creative, they have opened the world to invite the player to explore it. “I think the hook is great to quickly get somewhere” and climb “even higher.” Then it is possible to descend at high speed. The director emphasizes that the combination of all these systems makes Horizon Forbidden West a “more agile” video game.

At the beginning of development they tried many things in order to make the title more enjoyable. He remembers that in the first game, on some occasions, Aloy could find a climbing area that he however he could not reach, so the experience became somewhat frustrating. Now all those visible ledges are fully achievable. “There are a good number of quality improvement elements that we did at the beginning of the project.”

In the same interview, de Jonge has admitted that much of the development has been done with PlayStation 4 in mind, since the title has to work on both systems. Now, the creators of Killzone have also added a whole series of improvements to PS5, ranging from graphic, visual and sound aspects (3D audio) to adaptation to the DualSense controller.

Horizon Forbidden West will be released on PS4 and PS5. Its launch is scheduled for 2021, although there is still no specific date.

Kim Kardashian publicly scolds the sons of Saint and Psalm for...