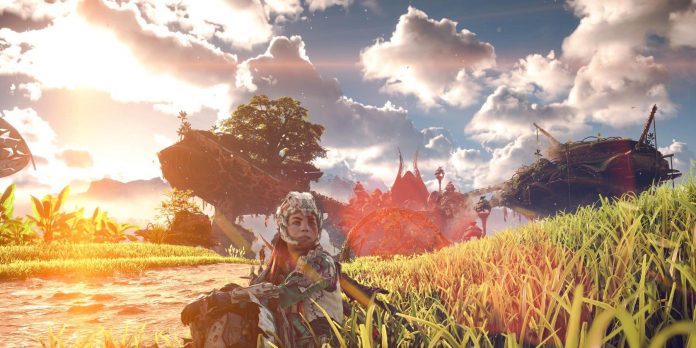 Guerrilla Games surprised fans at the Sony State of Play conference on June 2 with the announcement of the New Game+ mode for Horizon Forbidden West, offering many new features released that day. With a new set of trophies for Eloy, Horizon Forbidden West follows in the footsteps of its predecessor, releasing NG+ a few months after the initial launch. Both games offer players a smooth and complex combat system that requires the mastery of Eloy’s hunting prowess to successfully traverse the Earth a thousand years into a future where the landscape is dominated by animalistic Machines.

While players will be able to keep all their equipment, skills and stats accumulated during their first pass, NG+ offers hunters an over-complicated mode to increase the danger they will face in the wilds. Along with this, new legendary equipment, paints and face paints are added, offering challenging and exciting adventures for those who dare to take up the challenge. Released in patch 1.14, the update includes graphical improvements in Performance mode, transmogrification parameters for outfits, the ability to reset Eloy’s skills, several trophies related mainly to passing NG+, and many other improvements to quests, data points and actions.

The NG+ Horizon Forbidden West mode includes a currency called Champion Tokens, which is awarded to players for completing main quests, side quests, Errands, Tallnecks, Rebel Camps and other actions. Although the number of tokens varies depending on the task, it corresponds to the total number of skill points allocated for this task during normal passage. Players can still accumulate skill points in NG+, but upon reaching the limit, they instead earn “ghost levels”, which accumulate at the expense of XP and allow hunters to track their progress further. Champion tokens are used to buy new legendary weapons, paints and face paints.

Champion tokens only translate to NG+, and you need to collect more than 100 tokens, including eight legendary weapons of 10 pieces, as well as five face paints and four paints of five pieces each. Tokens are issued for completing basic tasks, but not for the training tasks “Reach the Stars” and “Interlude: Spearhead”. When players start passing NG+, they are given the opportunity to skip the training missions altogether, starting with the fact that Eloy leaves Meridian and goes to Chainscrape.

A cosmetic version of face coloring was introduced in Horizon Zero Dawn; however, these paints could only be obtained by going through various difficulties in NG+ mode, and Ultra Hard opened them all at once. In Horizon Forbidden West, when Eloy makes his way into the territory of the Tenactes, the opportunity to apply paint on his face becomes available through painters in three Tenactes settlements: Burning Spear, Bastion and Thorn Swamp. This reflects the culture of the Tenactes using ink to write stories on their bodies, and coincides with the new possibility of coloring Eloy’s outfits.

In Horizon Forbidden West, each tribe has face coloring pages that can be obtained for completing tasks, unlocking bursts of valor, or discovering military totems. The only exception was the Quen, a more advanced tribe from overseas who had access to outdated Magic Tricks, settled in a Landfall located in the ruins of modern San Francisco. With NG+, the Quen tribe gets its own set of face paints that Eloy can wear, although there are still no Quen costumes. New face paints cost five Champion tokens and are called:

In the Forbidden West, it became possible to collect plants to get different colors, which gave players a lot of bright colors that could be applied to Eloy’s clothes. Eloy, unlocked and bought through the trade of flowering plants and metal shards, must come to the dyer in different settlements to change the color of her outfit.

The colors in Horizon Forbidden West are ordered by tribe and can only be applied to the clothing of that particular tribe. In NG+, new paint kits no longer require metal shards or flowers; instead, champion tokens are used, and each paint costs five Champion tokens apiece, excluding the Ozeram and Quen tribes.

The legendary weapon was a new level in Horizon Forbidden West, above the purple “very rare”. Armed with three different types of ammunition, the legendary weapon is either bought with Arena medals or issued as payment for completing several quests and actions. Each legendary weapon can be upgraded five times, this requires rare and specific items from more advanced machines and their Apex variants.

How Prince Harry and Meghan Markle are Paving the Way for...