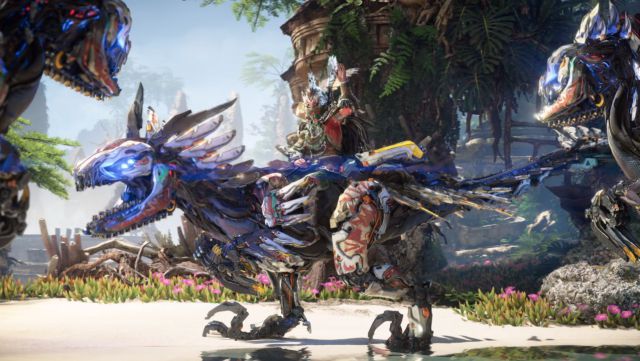 Horizon Forbidden West: In Horizon Forbidden West (for PS4 and PS5) we will face a good catalog of new imposing, powerful and very varied enemy machines. The post-apocalyptic world of Horizon Forbidden West is inhabited not by Zombies or mutated creatures, but by large and varied metal machines shaped like animals that stalk human survivors. In this sequel we hope to face even more adversaries, diverse and imposing in size and combat challenge. For this reason, and in order to prepare for the final stretch before the launch of the game on February 18 on PlayStation 4 and 5 consoles, we review everything we know in relation to these machines that we will find roaming around the wide open world designed by Guerrilla Games.

In Horizon Zero Dawn Aloy had to face a wide range of adversaries during the course of his great adventure. From small creatures called Watchers (a species of small theropods that usually patrol in packs) to powerful Jawbreakers, large metal crocodiles created to purify water before going crazy and changing their peaceful function to a lethal one. We hope to meet both species again, since the first was one of those that Aloy could hack to tame and thus use as a mount, something to be thankful for to cut distances in a wide world such as the one that Guerrilla has created for both the original and for this sequel (even bigger). As for the Chascafauces, we could already see how they now also patrol underwater, an environment in which the protagonist will begin to move thanks to her new gadgets, which allow her to dive. Not to mention the Longnecks, gigantic robots with flat heads from which we can peer into the horizon to discover what lies beyond.

“The idea was to explore a new region in the world of Horizon. It has been very interesting to investigate what kinds of machines would inhabit different ecological zones and how they would interact with each other, with their environment and, of course, with humans. Machines take care of the world, so it has always been interesting to assess the role they play and what the player can do to take advantage of their behavior. During the development of Horizon Zero Dawn, we had a lot of ideas, although we couldn’t implement them all in the first game. However, for Horizon Forbidden West we have been able to add some incredible ideas that were not possible before through new and attractive concepts! ”Says Blake Politeski, the lead designer of the machines on the Guerrilla team.

New dangers await us in the Forbidden West, both in the form of human adversaries and in the realm of machines. In official trailers published by Guerrilla we have discovered that in the post-apocalyptic version of San Francisco and its surroundings, fast and agile Garriraptor patrols, which will be difficult to avoid, and imposing Terremamut. Specifically, this last species has been tamed by one of the new local tribes, who use it as a great mount to move through the plains and attack anyone who crosses their path. How we will be able to take them down is still unknown, but we have no doubt that it will be quite a challenge with a satisfying and epic result. These are the first details about it that they have shared from the Guerrilla team on the official PlayStation Blog:

“It reminds me of a mixture of war elephants and the huge siege towers that were used to attack fortresses in medieval times: it is hard to destroy, it moves slowly and it has great attack power. Thus we came up with the idea of ​​the Terremamut, a machine with great armor, but with heavy movements. An enemy almost impossible to defeat. In Horizon Forbidden West, the human enemy factions control the machines, so it seemed natural to us to combine the two and introduce our own version of the war elephants, which carry a platform atop from where the humans shoot Aloy. To close the circle of the machine’s (eco) system, your goal is to maintain balance on Earth and ensure that humans do not destroy living things again. The Terremamuts were conceived as fighting machines. They take care of protecting other machines while they fulfill their mission without the interference of humans ”.

Tokyo Ghoul Fans Disappointed with the Second Season Should Read the...