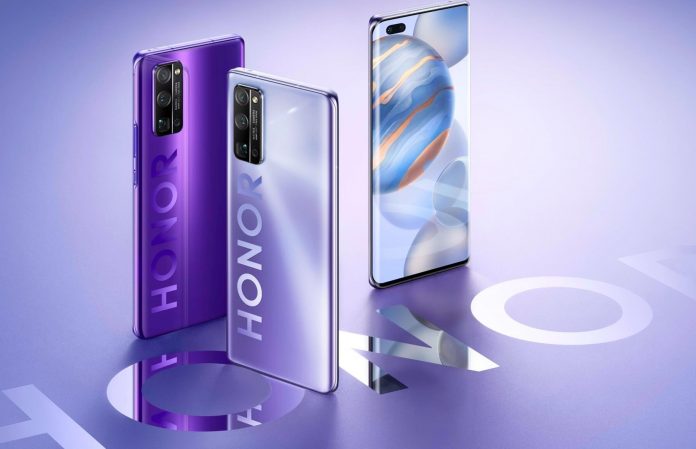 News continues to come back to back from Honor’s highly anticipated new flagship V40. The newly emerged images reveal the camera features and color options of the phone.

After leaving Huawei in the past months, Shenzhen Zhixin New Information Technology Co. Having become an independent brand acquired by a local consortium named Ltd, Honor is preparing to make a good start with a brand new flagship. The first step in this way will be the Honor V40, which is expected to be introduced soon.

A 50 MP camera with RYYB filter:

Focusing on the Honor V40’s camera and according to a newly emerged image, the new flagship will come with a 50MP camera with RYYB filter that improves color accuracy and gives pretty good results in low light. This filter, which Huawei uses in the camera of its phones, is an indication that Honor still carries traces of Huawei technologies.

In another image that comes out, there is a poster of the Honor V40. Firstly, the back design of the phone and the three different color options seen on the poster catch the eye; blue, black and gradient. Honor V40 will come with 5G support according to this poster. The phone will also offer 66 W wired, 45-50 W wireless fast charging support, according to previously revealed information.

Another remarkable detail about the general appearance of the phone is the almost bezel-less screen design. At the same time, there is a rectangular front camera area in the corner of the screen. The overall design of the Honor V40 looks very impressive.

The phone will be introduced on January 15 and will come with three models, according to images from a Chinese e-commerce site. Buyers will be able to choose between the Honor V40, V40 Pro and V40 Pro + models. Although there is no detailed information for each model yet, it is useful to remind that there are only days left for the introduction.

Where can I find the blue coin buried in Fortnite Season...