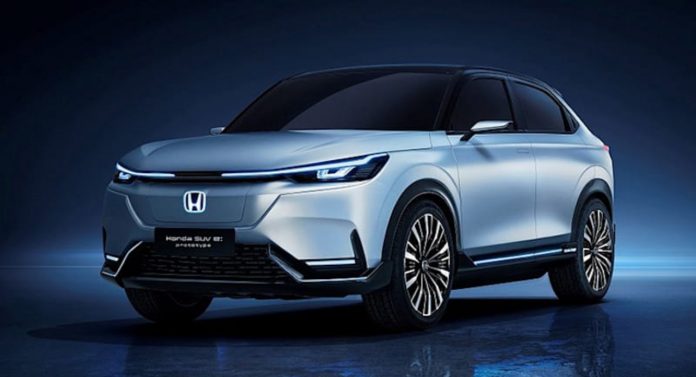 Honda unveiled its new concept car at the Shanghai Auto Show, which is currently underway. The Honda SUV e:, which has a rather oddly punctuated name, stands out as an all-electric sports car.

With the “Honda E” electric city hatchback getting good reviews, it seems logical for Honda to follow a similar concept in the crossover form factor.

Honda has big plans for electrification in China. The company notes that this show car is the first of 10 all-electric vehicles it plans to introduce there in the next five years.

Honda has not yet shared any detailed information about the technical features of the concept vehicle. Unlike its predecessor, the Honda SUV e: has four doors and a real charging port on the nose behind the Honda emblem.

In the new concept car, Honda huge air intakes have been replaced by a transparent surface with a pair of LED light strips underneath. Note that these lights are also wrapped around the rocker panels.

Overall, the styling of the Honda SUV e: is reminiscent of the HR-V, a slightly more stylish model with a contrasting roof and sculpted wings.

The prototype is equipped with the third generation Honda Connect system. It is stated that thanks to this system, the vehicle is heavily dependent on voice recognition, can operate smart home appliances, shop online while driving, access vehicle functions via a smartphone, and update the OTA software.

In addition, the company is updating its existing navigation and infotainment system and will begin rolling out on Honda vehicles later this year.

Honda SUV e: prototype appears to be ready for production. And a roadworthy version of the model is expected soon.