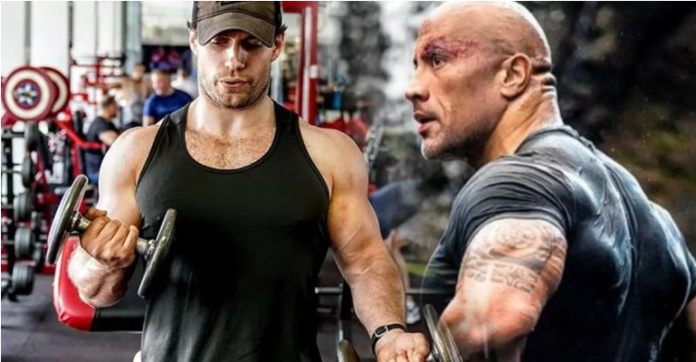 Viewers love to watch superheroes, as they are different from the usual main characters, stronger and definitely have an incredible physique. One of the greatest examples we can give here is Henry Cavill. This British actor has set high standards for superhero characters, sweating day and night for his role as Superman. You may have heard him talk about physical health, and for many years he has been constantly following fitness for his iconic roles.

From “Man of Steel” to “The Witcher,” physique remained a defining part of his performance. Cavill has undergone special training and a strict regime to keep his body in good shape. Well, this handsome man has proven his worth in every possible way that even the Muscle God of Hollywood has praised him for his “pretty hardcore” workout regime.

Dwayne Johnson, also known under the pseudonym “The Rock”, is one of the most famous wrestlers and actors in America. We all know that the now retired wrestler was known for his muscular physique and good physical fitness in the wrestling rings. The Jungle Cruise star continues to keep fit and has never deviated from his daily routine.

However, even with such a huge body, he believes that Henry Cavill follows a tough fitness program. A few weeks ago, in an interview with JOE UK on his YouTube channel, Johnson shared some details about Cavill’s workouts.

“His training regime is pretty tough. We have the same strength and fitness coach,” the 50-year-old star explained. He added that he has been friends with the star of Enola Holmes for many years and now they are working together.

Well, fans, of course, can’t forget the scene after the credits with Black Adam, when their Superman came on stage again years later. The star of the “Scorpion King” said that the fans will have a huge gift, because there will be a duel between them.

Are you excited about the confrontation between two of Hollywood’s most influential actors? Let us know your opinion in the comments section and stay tuned.

Beast Wars Misses a Chance to Level Up Transformers for a...

What We Do in the Shadows: Season 3 Wins Trailer; Season...