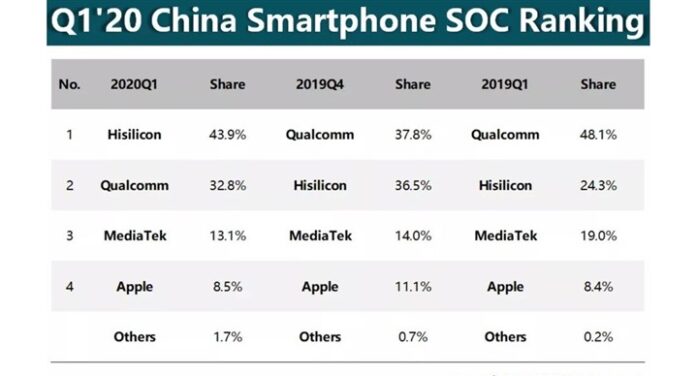 HiSilicon, a sub-brand of Chinese technology giant Huawei and producing processors for smart phones, managed to surpass its competitor Qualcomm for the first time in sales of smartphone processors in China.

The semiconductor and integrated circuit design company HiSilicon, which is part of Huawei Technologies, managed to pass the US based chip maker Qualcomm for the sale of a smartphone processor in China. It is stated that one of the reasons that enabled HiSilicon to pass Qualcomm is the difficulties caused by coronavirus.

HiSilicon sold 22.21 million smartphone processors in the first quarter of 2020, according to data from the Chinese monthly research firm CINNO’s latest monthly report on the Chinese semiconductor industry. HiSilicon had sold 22.17 million smartphone processors in the same period of last year, which means it was the only major company to grow compared to the same period of the previous year, even though there was no major growth.

This performance of HiSilicon came at a time when Chinese smartphone manufacturers began to wear down due to delayed devices. According to the report released by the Chinese Academy of Information and Communication Technologies earlier this month, smartphone sales in the country decreased by 34.7% to 47.7 million units in the first quarter of 2020.

According to CINNO’s report, there was a similar contraction in processor sales. According to the company’s report, sales of smartphone processors in China decreased by 44.5% in the first quarter of 2020 compared to the same period last year. US-based Qualcomm, which has been the market leader for a long time, dropped to HiSilicon and dropped to second place. MediaTek maintained its third place, but it experienced a decrease in its market share.

USA – China voltage and processor production
Huawei, the parent company of HiSilicon, is in the middle of the trade and technology wars between China and the USA. The Trump administration had banned US companies from cooperating with Huawei, saying that last year Huawei could share sensitive data from telecommunications networks with Beijing management.

The reason for this move of Huawei was that the US administration prepared a new law that requires foreign companies using US chip production equipment to obtain a license before selling to Huawei. According to CINNO, now over 90% of Huawei phones are using HiSilicon processors. However, the company’s founder, Ren Zhengfei, said they will continue to use Intel and Qualcomm processors as long as they are allowed.