Home Celebrity ‘Hightown’: an effective criminal drama that is lost in the excesses of... 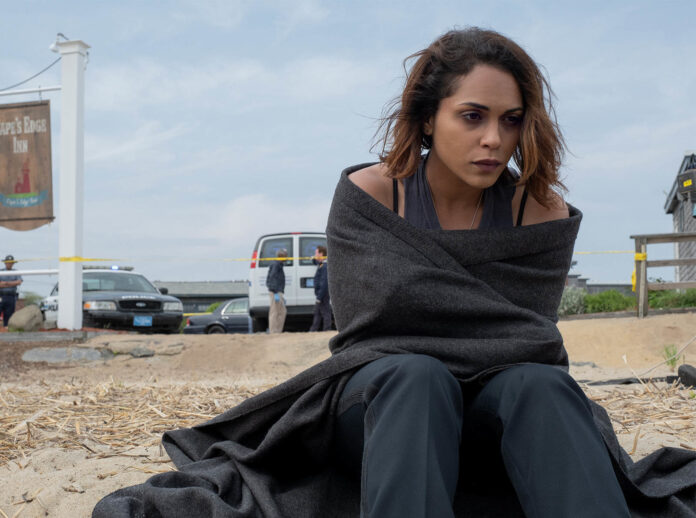 Contrary to current trends, ‘Hightown’, the new crime drama from Starz that arrives today on the Starzplay platform, shows us a festive opening sequence of credits, with happy, joyous images and some other police detention: we are on the coast more talkative. But on the coast there are also dodgy and sordid things. This is one of the messages in the series.

With the endorsement of being produced by Jerry Bruckheimer (the mega-producer to whom we owe ‘CSI’ and his entire franchise), Rebecca Cutter creates and writes this eight-episode criminal drama (of which I have been able to see four) set in the iconic Cape Cod from Massachusetts, United States.

The series begins with the cold-blooded murder of a young girl, whose body is found the next day by Jackie (Monica Raymond), a young agent of the National Fisheries Service. Despite not being in her jurisdiction, she will obsess over that case as motivation to turn away from her own alcohol and drug abuse.

On the other hand, Sergeant Ray Abruzzo (James Badge Dale) will be seen crossing red lines pursuing the resolution of this case because the murdered woman was an informant involved in the environment of the local “kingpin” of drugs.

Some protagonists past thread
With ‘Hightown’ what happens to me with many of the series that have come from Starz: they are a can and I do not want from the era of prestigious television. And I speak of “prestige” because of the profile of the channel and the ambition in its fictions. There is a certain need to enhance the favorite ingredients in the recipes of the “adult” and dark series that we like so much, but many times the balance is simply not correct.

It is not that it has anything against self-destructive characters, antiheroes or how we want to define them (although sometimes they are overused for alleged complexity). The problem I see throughout the series (half of it, which is what I can judge) is that this character / story balance fails and this hinders what is also an interesting case.

Monica Raymond is very good in her starring role but sometimes the script gets stuck with her. Time and time again we can see that the less thread it is, the better the series breathes. This not only goes with her (although it is still a story of his redemption / rehabilitation), since it is a problem that is also in the character of James Badge.

An effective crime drama “of the provinces”
On the other hand, ‘Hightown’ follows in the wake of other “provincial” crime dramas (‘Justified’, for example), showing us the authenticity of the site, its locals and the characteristics of a place that is the antithesis of the big cities that so many times they have been explored in fiction. The photography is in love with the site and it shows.

I think that, ultimately, we find a police series that is quite effective but that is believed to be more complex and profound than it really is. Despite having my points against how the characters are developed, I think it’s generally pretty well done.

Shortly after the Queen’s funeral: the tomb died (18 years old)