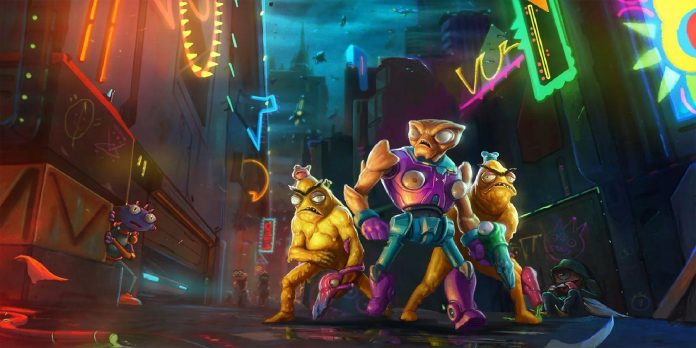 High on Life is an upcoming sci—fi first-person shooter from Squanch Games, a development studio founded by Justin Roiland of Rick and Morty. For the first time, the game was presented at the Xbox and Bethesda Games Showcase, which took place in June at the Summer Game Fest. Since then, more and more details about High on Life have been revealed as the game approaches the release date set for the end of this year. For example, at Gamescom 2022, High on Life demonstrated more gameplay, and the development team also discussed plans for the future.

High on Life is a bizarre first—person shooter, which is scheduled for release in December this year, and executive producer Matty Studivan recently reported that the team was even working on some DLC ideas for the game. According to Studivan, the studio has already considered ideas for post-release High on Life content, which will include bug fixes, as well as some additional content that was not quite included in the original version of the game. This post-launch support will also include some DLC for High on Life, but Studivan didn’t go into details about what it might look like.

He did discuss the studio’s previous game, Trover Saves the Universe, which was a sci-fi virtual reality game showcasing that famous style of comedy that one would expect from one of the creators of Rick and Morty. “With Trover,” Studivan said, “we’ve been supporting him for a very long time.”… And so I think we want to do the same with High on Life.” Even a few months before the recently postponed release date of High on Life, the team is already discussing DLC plans, which for some may seem a little premature.

However, it is quite logical that the Squanch Games team wants to provide High on Life with additional content as soon as possible, especially taking into account another important detail revealed at Gamescom. According to Studivan, it will take only about 12-20 hours to complete High on Life. For those who like to explore the wacky galaxy High on Life, this may turn out to be a short experience. Since players can quickly complete the game, additional content quickly added to High on Life after its release can extend the shelf life of the game.

Although High on Life may not offer hundreds of hours of play since launch, it seems that 12-20 hours of play will be interesting thanks to the setting, comedy and game design. The talking weapon High on Life is a unique addition to the game that will comment on the player’s actions, acting simultaneously as a means of destruction and a comedic assistant. Also, with Studivan confirming that DLC ideas are being discussed, it seems that there will be more content coming soon after the launch of High on Life, which will extend the initial short game time.

BTS: Jungkook Now Owns The Moon Thanks To a Gift From...

Halo Infinite Will Not Be Delayed: They Promise Its Premiere At...