Home Celebrity The hidden meaning of Taehyung’s tattoo on ‘ON’ 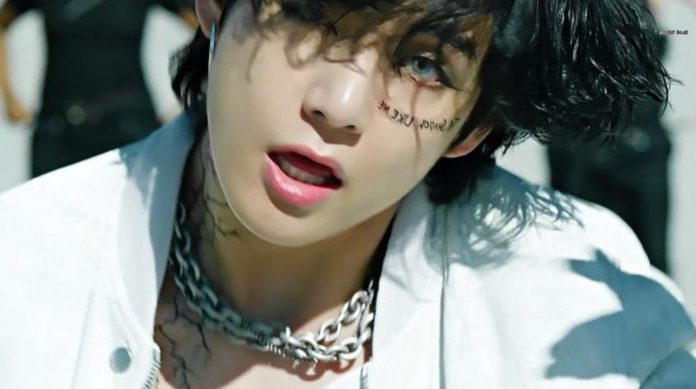 The hidden meaning of Taehyung’s tattoo on ‘ON’. The details in the idol’s look complemented the message of his new song.

During the ‘ON’ video that the group has just released, all the members showed us amazing looks with outfits that looked great . Who surprised with the details in his appearance was Taehyung , who in addition to wearing long black hair that accompanies his mysterious appearance also wore a tattoo on his face.

It is a phrase written on his cheek, where you can read ‘The shadow like me’ . The idol also wore a tattoo-shaped mark on its neck, which simulates a worn texture, as if its skin was breaking .

Both tattoos are very consistent with the meaning of the song, here we explain why. The letter of ‘ON’ says in the first verses:

“I look at my feet, I look down. The shadow resembles me, is it the shadow that is trembling, or are my feet trembling?”

The letter refers to the way in which the boys see themselves doubtful of the steps they take , and even wondering if what they are now is what they always wanted to be or have totally changed.

On the other hand, the simulation of slight breaks in the neck of V tell us about the same fragility that the song is about, the way in which external factors can hurt them while pursuing their objective, but, although fear and difficulties can bring them down , they choose to use them as motivation to get ahead.

V’s tattoo on his face has excited ARMY and, although it is difficult to appreciate it with his dance movements and the camera going from one side to the other, fans have been responsible for capturing the precise moments so that the rest can appreciate these details . Do you like how V looks with tattoos?