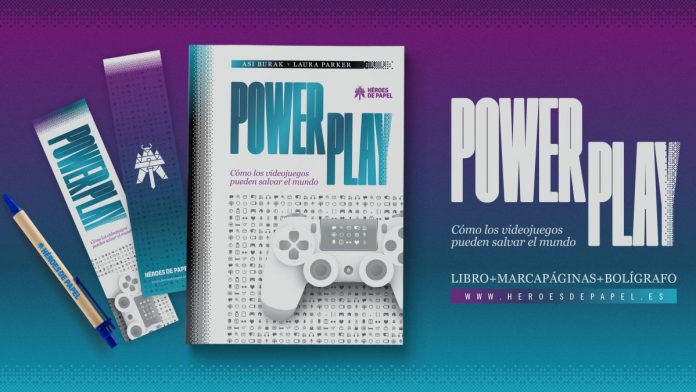 Heroes de Papel: The new volume from the publisher specializing in video games is a translated version of the book written by Asi Burak and Laura Parker.The publisher Heroes de Papel has announced the launch of a new book. It is about Power Play: how video games can save the world, a research work that delves into the benefits of this type of work. The rise of video games has generated debates in the press, but also among politicians and parents, often from a negative point of view. However, this volume signed by Asi Burak and Laura Parker (translation by Concha Fernández Álvarez) looks at the medium from a different perspective: it explores how video games are promoting social change across the planet.

The book will be available in bookstores and supermarkets on July 6. As usual, it is now possible to reserve the product on the publisher’s website, in which case you will receive an exclusive bookmark and a pen.

A different point of view

Laura Parker is a journalist who publishes articles about videogames and technology in media such as The New York Times, The New Yorker and Vanity Fair; Thus, Burak served as CEO at Games for Change, while today he has become CEO. According to the press release sent by Heroes de Papel, he has dedicated the last decade “to supporting and promoting the use of video games for social welfare”, all in collaboration with organizations and institutions such as the White House, NASA, the Bando World or the United Nations. This movement “has put millions of players in command of meaningful experiences”, touching the conflict in Palestine and Israel or even the Constitution of the United States.

Power Play focuses attention on video games as a global movement. In this way, the authors present the people behind some of the most representative titles of the movement. Among these people are Sandra Day O’Connor, former Justice of the Supreme Court of the United States, as well as Nicholas Kristof and Sheryl WuDunn, both awarded with a Pulitzer. At the same time, they are investigating how virtual reality will serve to address socio-political problems from its immersive position.

This is Viego, the new League of Legends champion