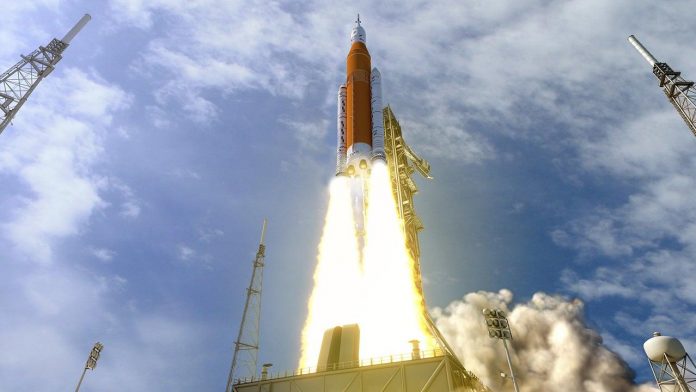 NASA is going to make a historic launch of its superheavy lunar rocket on Monday. Here’s how and when you can watch it live.

The Space Launch System (SLS) is the most powerful rocket ever created. In fact, it is the modern equivalent of the powerful Saturn-5 rocket that sent the first people to the moon in the 1960s and 70s.

Countries around the world have once again put their objects on the moon, and NASA hopes that SLS will play an important role in returning people to the moon in the coming decades as part of the Artemis program.

However, launching an untested rocket is a risky venture, and therefore, before it can safely put a human crew into orbit — and far beyond it — NASA must prove that it can actually fly.

When will the launch take place?

The first unmanned flight of the SLS, known as Artemis 1, is due to take place in just a few days, on Monday, August 29.

The rocket was delivered to launch pad 39B at the Kennedy Space Flight Center in Florida on August 17 on a Leviathan tracked chassis, and, by all indications, the SLS is preparing for launch.

NASA completed a flight readiness check on the 22nd, giving the rocket the green light to take off, and according to recent reports, there is a 70 percent chance that weather conditions will remain favorable during the two-hour launch window.

In other words, after a decade of planning and development, it may finally be time to light the biggest candle on Earth, and here’s how you can watch it live.

How to watch the launch live online

NASA intends to broadcast the launch live on August 29 during the day on its NASA TV channel on the official website or on its YouTube channel.

Avid space fans can tune in early in the morning from 21:00 Pacific Time / 12:00 Eastern time / 5:00 UK time onwards to watch a report on fuel loading, where giant tanks placed in the main stage of the SLS are filled with 730,000 gallons of liquid hydrogen and liquid oxygen.

Full coverage of the launch will begin at 15:30 Pacific Time / 6:30 Eastern Time / 11:00 UK time and will provide preparation and coverage of the launch window, which will open at 5:33 Pacific Time / 8:33 Eastern Time / 13:33 UK time. Assuming the launch is successful, the broadcast will continue to follow the massive rocket as it drops the Earth’s atmosphere, separates and directs the upper part of the spacecraft, including the Orion crew capsule, on a trajectory to meet the Moon.

Make no mistake, this is a historically important launch, the success or failure of which will help determine the trajectory of NASA’s lunar exploration plans for the coming decades.

A huge amount of money was invested in the creation of the SLS, the launch and development of which — as is usually the case when it comes to space exploration — were associated with numerous delays and budget increases.

It is also worth noting that in the conditions of the modern space age, when SpaceX introduces innovations in the use of reusable rockets, such as the phenomenally successful Falcon 9, Falcon Heavy and the upcoming Starship, the SLS is a ready—made rocket. It is completely non-recyclable, and given that each launch costs about $4.1 billion, it’s fair to say that NASA will be desperate to see the impressive results of the rocket on its first launch.

A standard set of pre-launch checks will be a nerve-wracking affair, but if the mission operators are satisfied and eventually given the green light, it will be a historic sight. After all, it’s not often you see a 320-foot-tall, 5.75 million-pound rocket expelling 8.8 million pounds of thrust in an attempt to escape the gravitational influence of the Earth.

Under ideal conditions, the launch could happen very close to the opening of the launch window. Similarly, if there are any bad weather conditions or problems down below, NASA will not hesitate to take advantage of the two-hour launch opportunity or land the rocket altogether. This is still far from a sure thing.

However, along the way, we can expect constant comments from the NASA team, both before and during the launch, in which the rocket’s capabilities are revealed. We will also definitely get interviews with its creators, in which the goals and problems related to the Artemis-1 mission will be discussed.