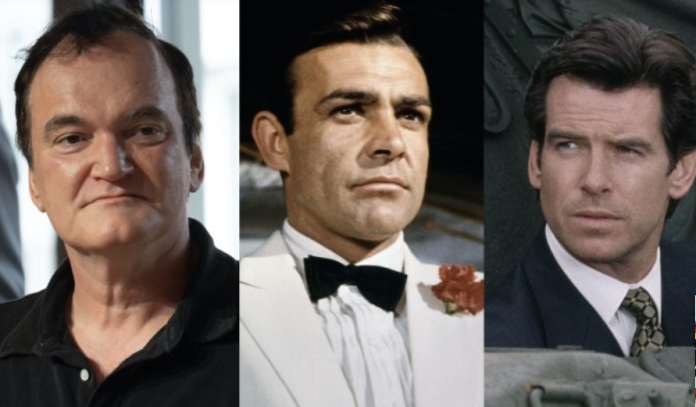 Quentin Tarantino has published his rating of James Bond actors.

In a conversation with Empire, the director of Pulp Fiction was asked to sort each 007 star from best to worst. And although he did not list all of them, he clearly identified his top three.

“Sean Connery, Pierce Brosnan, then Roger Moore a little bit under him. And then everyone else,” he said.

“Connery is on top, but I really, really like Pierce Brosnan. I didn’t care about the films in which he was shot, and I always considered it a tragedy, because I considered him a legitimate Bond.”

He added: “I’m a big fan of Roger Moore — I just like Roger Moore a little more when he’s not playing Bond.”

A famous fan of Pierce Brosnan, Tarantino once offered the actor an idea for a James Bond movie when they were both very drunk.

“It was after “Kill Bill. 2, and he wanted to meet me, so one day I went to Hollywood from the beach and met him at the Four Seasons Hotel,” Brosnan recalled during an Esquire live broadcast with Goldeneye.

“I arrived there at 7 pm, I like to be punctual. 7:15 has arrived, Quentin is gone. He was upstairs doing the press. Someone sent a martini, so I had a martini, waited until 7:30 and thought, where the hell is he? There were rumors, I’m sorry, so I thought, okay, I’ll have another martini.”

Brosnan recalled that he was “pretty stoned” when Tarantino eventually showed up, and after the director decided to pour him a drink, he was also “pretty stoned.”

“He was banging on the table, saying: “You’re the best James Bond, I want to play James Bond!” And the restaurant was very crowded, and I thought, please calm down, but we won’t tell Quentin Tarantino. calm down,” the actor continued.

Brosnan has not divulged any details about Tarantino’s idea, although the director has since revealed that the film would adapt the Casino Royale story and serve as a sequel to On Her Majesty’s Secret Service, where Bond is still grieving after the murder of his wife.

“That would be nice to see,” Brosnan teased.

The director made the statement during an appearance on Jimmy Kimmel Live. However, he noted that taste in art is subjective, and his choice may not be a “cup of tea” for everyone.

Game of Thrones: 9 Characters That Changed The Most In The...

Elden Ring Makes History: What Are The Games With The Highest...