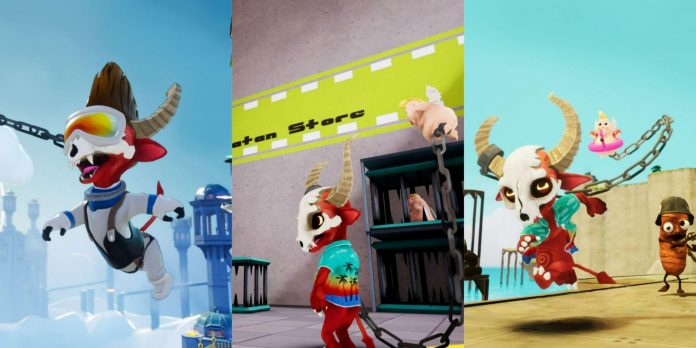 Platformers have taken players to all kinds of wild locations. From android factories in the cold depths of space to hidden volcano fortresses and tropical jungles, the genre has no trouble spitting out new and exciting settings in which players can test their jumping skills. Hell Pie is a 3D platformer inspired by classic mascot titles like Spyro and Crash Bandicoot, and it takes place in Hell.

RELATED: The Best Platformer Games (According To Metacritic)

Nate’s adventure to travel through Hell, gathering the ingredients for Satan’s birthday pie, is fun and inventive, but that’s not to say that this game is without its faults. For every great character design, fun platform sequence, or smirk-inducing dirty joke, there’s a problem lurking in the background that needs to be addressed. Here are the biggest fixes that the game needs right now.

Hell is one of the most quirky and dynamic locations yet to appear in a 3D platformer. It features a variety of interesting (and disturbing) mechanics, such as the ability to rip the horns off of adorable creatures in order to gain power-ups for oneself, as well as some excellent visual design.

With fantastic character designs and a few innovative twists like that one, it’s a shame that Hell Pie doesn’t make the most of its infernal setting. Given the abundance of fire, scatological humor, gore, and general cartoony awfulness, the game does a good job at always reminding players of the setting, but the story itself doesn’t take much advantage of this fact. It’s a mascot platformer, not an RPG, so no one is expecting the deepest storytelling around. Still, it would be nice if the game gave players a better reason to invest in the world and its events.

How much combat to include in a platformer is a question that has plagued developers since Mario jumped on his first Goomba. This genre isn’t about fighting, after all, but enemies are one of the most dynamic obstacles that can be put in the player’s way. In a genre all about safely navigating through environments, it’s a bit of a waste to not challenge the player in as many ways as possible. Hell Pie includes combat against regular enemies scattered throughout the levels as well as against the occasional boss. There doesn’t need to be more combat in Hell Pie, the combat just needs to be better.

Perhaps the most important factor in any game with combat is how satisfying that combat feels. This is arguably even more important than whether the combat is easy or difficult, because players of all skill levels will often dive back into battle over and over as long as those battles are satisfying. Hell Pie needs some tweaks in this department to reach its full potential. It doesn’t need to be a platformer even harder than Cuphead,it just needs some help.

There’s so much to like about Hell Pie. Fans of Conker’s Bad Fur Day will get no end of giggles out of the adult humor, and fans of Spyro will relish the excellent platforming sequences. While the game is by no means open-world, there are multiple ways that the player can tackle many of its platforming sections, depending on what abilities the player has invested in. All of this makes it easy to recommend the game to someone looking for a dark and cheeky take on 3D platforming.

The caveat is that much of the game’s content lacks polish. It feels as if many of the game’s best ideas were brought to 80-90% completion and then abandoned, as the designers were forced to move on to other things. Whether or not that’s what actually happened, the result is a game with mechanics, characters, and environments that feel just a few drops away from perfection. What’s here is grand. It’s just not as grand as it could be, and while it’s not fair to compare a game to its hypothetical ideal version, some issues are glaring enough that they sour the player’s experience, at least briefly.

Some games are broken. They are so plagued with bugs that they are literally unplayable, crashing the game constantly, causing the player to be permanently frozen in a piece of architecture, or otherwise destroying the entire experience, not to mention the fun. Buggy games can be fun, but broken games aren’t enjoyable to any degree, because there’s simply no gameplay to enjoy.

RELATED: Best Bosses And Enemies Of 2021

Hell Pie is by no means a broken game. That said, it does have its share of bugs, and though none of them make the game unplayable, they are numerous enough and noticeable enough to be a problem. Things like collectibles clipping through the floor and therefore becoming impossible to collect, or the camera having issues for seemingly no reason, detract from the overall experience. Even the worst of these can be solved with a reset, so the player won’t be kept from progressing for long. Still, having to deal with such issues is frustrating, especially if the player enjoys the game enough to take another run at it.

Currency, Lucky Cats, bizarre unicorn creatures, pie ingredients, and more are scattered throughout the game, and it’s Nate’s job to collect them all. It’s common for platformers to be collection-centric, using the finding and gathering of items as one of their driving mechanics, and Hell Pie is no exception. There’s nothing inherently wrong with this, but collecting isn’t always the most satisfying gameplay loop.

While tracking down every shiny golden thing hidden in a secret alcove may be a completionist’s dream, it’s grating for many players who have done exactly the same thing in hundreds of other games. Many of the platforming segments needed to reach these items are excellent, but this perpetual treasure hunt often doesn’t feel worthwhile, and that’s a serious problem for any game in this genre.

“Jurassic World: Dominion” is the longest film about “Jurassic Park”