The legendary players of the American basketball league NBA, Kobe Byrant, died in a helicopter crash yesterday. The reason for the accident that Byrant lost his life has not yet been announced by the official institutions. However, TMZ magazine site announcing Bryant’s death, following the clues, claimed that the accident occurred due to heavy fog and pilot error.

Allegedly, the pilot of the helicopter contacted the Burbank Airport control tower at 9:30 am in the USA. The pilot started circling due to heavy fog. Unable to provide a proper viewing angle, the pilot turned to the west. The pilot, heading west because of the fog, faced an even dense layer of fog and turned the direction of the helicopter to the south this time. The helicopter heading south was also the main reason for the accident because there was a mountain from the south.

The path Kobe Byrant’s helicopter took before falling down is as follows: 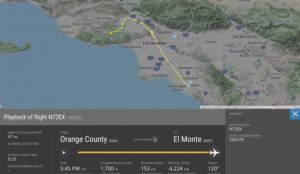 Real Madrid has three Bayern Munich players on the field

CHRIS BROWN PRESENTS HIS NEW SON AND DISCLOSES HIS NAME

Huawei P40 Pro Plus is introduced! Here are the features and...

Oxford research says games are good for the mind