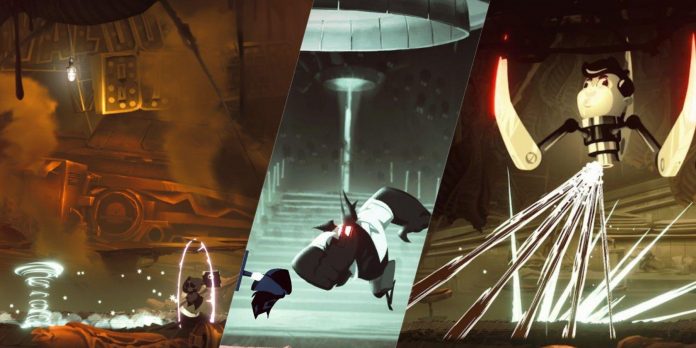 Have a Nice Death is an interesting sidescrolling action game that is currently available in early access on Steam, and it got a free update in the form of the Fast Food expansion just last month, with more projects currently in the pipeline. Have a Nice Death is a roguelike title that is more akin to video games like Hades and Dead Cells when it comes to the gameplay loop, but its 2D animations make it similar to Hollow Knight and its highly anticipated sequel, Hollow Knight: Silksong. In the Fast Food update, players will lead Death into the Toxic Food-Processing Department to scold employees that ran amok and fight tomato slice-shooting burgers and muscly pickle jars along the way.

In this Gearbox Software-published game, the new Fast Food update not only provides fans with more content, but it is a way to discuss the importance of healthy diets compared to the preservative-filled and sugary junk food that modern society consumes. According to Nicolas Leger, the creative director and animation director for Have a Nice Death, the Fast Food update is supposed to delve into the aesthetics of American diners from the ’50s to make it clear that fast food restaurants are part of the problem, but not the only issue. Game Rant spoke with Leger about the themes of the Fast Food update, the challenges of animating video games compared to movies, sources of inspiration like Tim Burton films and the One Punch Man animated series, and more. This interview has been edited for brevity and clarity.

Q: What was it like for you to transition into the gaming industry after working on film animations?

It was difficult at first because I had to adapt to the tools and requirements of the medium. Animation in video games requires a very different approach, and I found it quite frustrating in the beginning. There were less traditional techniques; constraints of weight, format, and number of images; and very short animation cycles. I had to sacrifice what I considered a cornerstone of animation – the mastery of rhythm and staging – for a succession of combinable animation loops.

The code is also a determining factor, as it handles movements, directions, triggers, etc., so animators and developers have to work together as one. Once you have mastered these constraints, it becomes quite fun to play with them. Besides, for the theatrical and narrative aspects, there are always cutscenes, which are similar to cartoons.

Q: What does your creative process look like when working on video games?

Similarly to what we did for Unruly Heroes, we built a graphics portfolio for Have a Nice Death with character design sketches, posing, concept arts, animation roughs, proposals, gameplay concept drawings, storyboards, etc… everything that allows us to set the foundation for our world. Then, through brainstorming, iteration, and validation, the project develops, slowly becoming richer and more cohesive. Meanwhile, we also gather all kinds of documentation to serve as inspiration for the project: visuals, movies, literature, architecture, music, etcetera.

Personally, I always need to lay my most basic, obvious ideas on paper. Those spontaneous notes are very important to me; we always tend to stray away from them as the project progresses, while the core concept is often there from the beginning. I often interrupt any task to note an idea I just had, or draw a quick sketch. I focus on spontaneity before thinking, in order to produce a lot of content, which I refine later. I gave Have a Nice Death a lot of my personal style, and that allows me to feel at ease on the project with a lot of creative freedom, while still challenging myself. Feedback and discussions within the team are also very important. This not also helps justify your choices but also taps into the collective unconscious.

Q: How did you come up with the characters in Have a Nice Death?

Everything originated from a little sketch of Death, born in the corner of a page during an Unruly Heroes meeting. I thought it had great visual potential: simple proportions, clean silhouette, an obvious and iconic weapon, and this concept of a shapeshifting cloak immediately gave me ideas for movement and combat. It was just one or two months later that I made the next step with a staged gameplay video during my free time. My characters are inspired by various influences, from comics to anime shows/films, and subconsciously by all sorts of media, like illustrations, movies, shorts, and ads. I wanted to keep a cartoonish style because it gives me so much more freedom. More importantly, for traditional animation, it is paramount to stay as simple as possible, because every additional detail represents a huge amount of work.

Q: Have you ever considered Have a Nice Death to have a different style than the one you chose?

Not really. The original gameplay video I staged and produced, illustrated clear artistic direction: black and white, misty, Burton-like, and cartoony. Have a Nice Death really explores my personal style. Even if the final picture has evolved since then, it has only gained in quality and richness thanks to the team’s artistic and technical expertise. The game’s style is still my own, but it is also the sum of all its influences and interpretations.

Q: What were your main sources of inspiration while making Have a Nice Death’s characters, items, and animations?

Initially, the project was heavily inspired by the gothic and fantastic universe of Tim Burton. On the animation side, Asian culture has always inspired me. There are incredible things coming from Japan, Korea, and now China. Amongst them, Akira remains a masterpiece, just like the work of Miyazaki. Several series have also been real catalysts: Furi Kuri (from Gainax), Studio 4’s productions, or more recently One Punch Man (from Madhouse). In addition, France is quite rich in influences: Fortiche Prod, Bobbypills, Je suis bien content, CRCR, etcetera.

As for video games, Ori and the Blind Forest, Hades, Dead Cells, and Hollow Knight were our main references, whether for the quality of their graphics, their narration, gameplay, or style. But in the end, it is our concept artist (Christophe Messier) who managed to make the world his own, giving it a unique touch that got us all under its spell.

RELATED: From Rogue to Returnal: How Games Like Hades and Spelunky 2 Prove Fans Aren’t Sick of Roguelikes

Q: What’s the story behind Have a Nice Death’s Fast Food update?

The theme that we wanted to address with this new department is the dangers of the food-processing industry, which is responsible for sugar addiction and “poisons” our meals with elements that have nothing natural. Fast food restaurants are just an aggravating factor. Problems like diabetes and cholesterol from obesity are among the top causes of death globally, we could not just ignore them.

In Have a Nice Death, this real-world issue becomes more urgent when the Sorrows take charge. Visually speaking, a world filled with junk food monsters was also quite easy to imagine. Our hero, Death, will have to fight his way across food-filled rooms and corridors that look like processing factories. That is what we wanted to highlight: the sickening aspect of over-consumption, and the pernicious effects of the food industry on humanity.

Q: What are your favorite parts, including enemies, of the new Fast Food update?

I had a lot of fun working on the design and animations of the new enemies. I also enjoyed seeing the environments take shape and find their personal vibe, thanks to the team’s efforts. And even though it requires a lot of work, I am always happy to be able to create animated cutscenes, as a sort of creative break within the project.

Q: Was it challenging to design monsters inspired by unhealthy food? What were the highlights?

Weirdly enough, we had many ideas for this world! Junk food is really a universal concept. But we had to make choices based on gameplay utility or appearance. I like to figure out animations that draw from the character design, like a burger that appears and disappears in successive layers, or one that spits out a tomato slice.

The clearer the design, the easier it is for the player to apprehend the threat. Visual comprehension must be immediate and intuitive, even before the animation plays, which is a constant challenge. The final boss, Waldo, was a bit harder to figure out, as it was meant to evoke the mascots of American diners’ in the 50s. We wanted it to look quite disturbing.

Q: Which new weapons and spells do you think are the most interesting to use in the new update?

I particularly like the new weapon, Death Star, a heavy and devastating mace. As for the spells, Frostoxic’s ice spikes are pretty deadly!

Q: Do you have anything to add that I didn’t ask?

Nothing specific, really. Thank you for taking the opportunity to learn more about the game. We’re already working on our next update and as always, we would like to thank our active community for their continued support.

Have a Nice Death is in Early Access on Steam for PC.