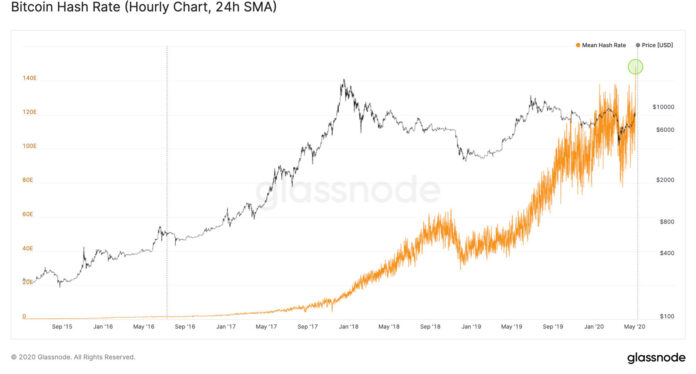 The biggest cryptocurrency Bitcoin’s hash rate broke the all-time record today and is based on 150 quintillion hashes per second.

As the Bitcoin block reward halving approaches, miners give more weight to mining before the reward is halved.

According to Glassnode, which provides data on cryptocurrencies, Bitcoin’s hash rate has surpassed the all-time record. This figure, which exceeds 140 kentillion hashes per second, is based on 150 kentillion hashes. The previous highest level was measured as 136 Kentillion in March.

What does the Hash rate climb mean?
The rise in the hash rate shows that Bitcoin mining has been given more weight than ever. This is understandable as the halving is expected to happen in the next 8-9 days. As is known, the 12.5 BTC mining reward per block will be halved with halving. These times are the last chance for miners to get a reward of 12.5 BTC per block.

On the other hand, the higher the hash rate, this means that the Bitcoin network is strong and secure.

The biggest cryptocurrency Bitcoin with its market value is bought and sold at $ 8880 in the minutes when the news goes live.

THE KARDASHIAN START A WAR OF FOOD AND THE FANS

Apple Is Said To Develop AirPods Pro Lite To Dominate The...

Why Google wants to use a Samsung processor in Pixel 6s

PS5: New images of Destruction All Stars on PlayStation 5