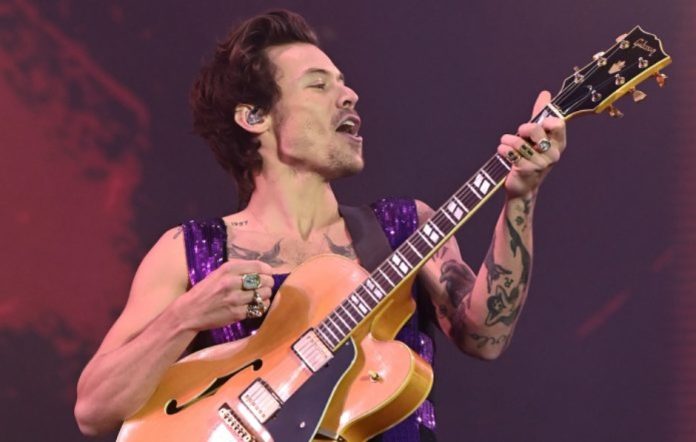 “Can I please get some tense gender reveal music?”

Harry Styles revealed the gender of the unborn children of two fans during his concerts in Los Angeles last week.

The former One Direction singer performed at the Kia Forum Stadium in Inglewood, California, on Friday evening (November 11) as part of his 2022 North American “Love On Tour”.

At one point in the show, a member of the crowd named Sidney handed Styles a document after holding up a sign that read, “Is my baby a boy or a girl?” The pop star then asked her how far she had come, to which she replied: “Four months.”

Stiles told the audience: “Make a fuss for Sydney, everyone. She’s going to do the hardest thing in the world. I’m sure everything will be fine! The most beautiful thing you can do in the world. And it will be… are you ready?

Creating tension, the singer then asked his keyboard player to provide “some tense gender revealing music” to accompany the special announcement. “I know something you don’t,” he teased, before finally revealing, “It’s… a girl!”

The next night (November 12), another pregnant fan, Shawna, asked Styles to reveal the sex of her baby. “It’s the season of gender disclosure, we had one last night!” he said.

— How long do you want me to continue this? he asked . “It’s a girl!” Check out the messages below.

Sidney, who hails from Duncan in British Columbia, Canada, later reflected on this moment in an interview with Chek News. “I was crying and everyone was so excited and happy,” she said.

“I’ve seen on TikTok that [Styles] has revealed gender a couple of times in the past. When I found out I was pregnant, I had already bought concert tickets, so I thought I could try and see if he would reveal our gender.

“We got an ultrasound card, but we didn’t look at it, and then I took it with me to Los Angeles.”

Styles recently rescheduled three concerts of his current 15-day residency in Los Angeles after falling ill with the flu. Now the dates will take place on January 26, 27 and 29. Tonight (November 15) he will play his last concert Kia Forum 2022.

The star, who released his third solo album “Harry’s House” in May, will return to the UK and Ireland next summer as a follow-up to his giant “Love On Tour”.

Back in August, Harry Styles announced that he was already working on ideas for his fourth studio album. “I always write,” he said then.