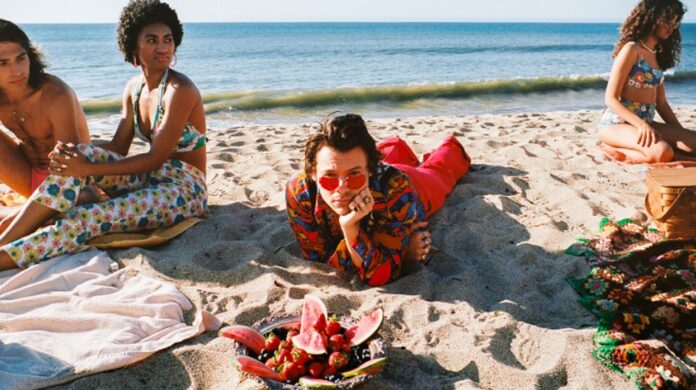 Harry Styles continues to promote his second solo album titled “Fine Line”, the singer has already released 3 singles and now it is the summer’s turn to put the quarantine to music.

The Brit surprised his fans with his new video “Watermelon Sugar”, fourth single from his album, we tell you the details of its release.

Positioning himself on the global trends of Twitter, the singer shared a video full of summer, friends and many watermelons. Harry showed scenes from a beach party, where said fruit was the main element in the theme of his song.

The video shows the Brit enjoying the sun while being fed with slices of watermelon, some fans have shared their favorite scenes from the video, as it recreated the vintage atmosphere of the 70s.

Some followers highlighted that Harry, through his music and the elements of the video clip, tackled taboo topics about the privacy of people. The singer is known for breaking stereotypes between masculine and feminine, he is someone who has proclaimed himself in favor of the rights of the LGBT community.

The Harries expressed their support for the way he portrays situations that are not yet accepted as normal, but it is something that should be spoken more freely.

The success of Fine Line has led Harry to be part of the predictions and rumors of the next GRAMMY nominees, it would be his first award in that category in his solo career, his second album has sold more than 1 million copies.

Miley Cyrus and Hailey Baldwin open up about their beliefs and...